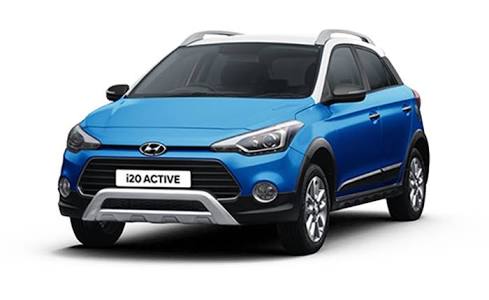 I20 has been Hyundai’s topmost model since its launch. Hyundai Motors has very silently and effortlessly updated the i20’s Active model which is available in the market.

The model is available in the market in a total of three variants, which are:

The new model also gets safety systems which meet the mandatory safety norms such as sensors for parking, reverse camera, seatbelt for drivers and passengers, an alert system for speed etc.

Visually, the design of the modified Hyundai i20 is very similar to that of its previous model and is loaded with some premium features such as projector headlamps lens attached to LED DRLs and the cornering lamps, taillights with LED, fog lights, plastic body rugged with cladding, antenna in the form of shark-fin, wheels cut in the shape of diamond cut.

Additionally, the car gets plates with skid plates on the front and the rear bumpers which come with roof rails.

The finishing of the new model of i20 Hyundai Active is way better and funky.

The car come up with a 7-inch infotainment touchscreen system with an Apple CarPlay and an Android Auto along with with a push-start button, control of climate button, rear AC vents, wireless charging etc.

The first time features include disc brakes which will make them come back with the B-segment hatchbacks.

The updated model comes up with a 1.2 litre motor of petrol and 1.4 litres of diesel.

The petrol engine powers 82 bhp and 115 Nm of torque peak and is paired up with a 6-speed manual gearbox.

Whereas the Diesel engine powers 89 bhp and 220 Nm of peak torque and are also paired up with a 6-speed manual transmission. However, the diesel version is only available in the topmost model which is the SX trim available in the hatchback – crossover.

As per speculations, there is no fixed date or month for the debut or launch of the Hyundai’s upcoming model.

As per the company officials, the model is expected to debut at the Auto Expo of 2020 and will be seen with several first-time premium features.

Hyundai’s i20 Active model starts with a nominal price of 7.74 Lakhs and the price increases as the number of features increase.