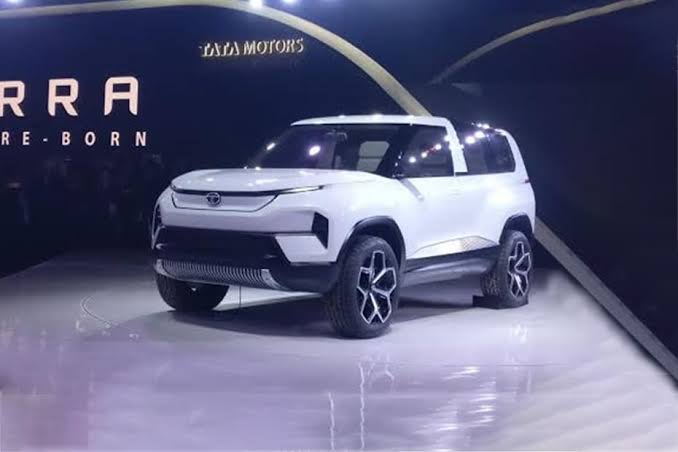 The last week of April is going to be a lot exciting for all car and bike lovers in India. Three new vehicles are set to be launched one day after the other and all of them are highly anticipated by the auto lovers everywhere.

Tata is set to launch its new all electric SUV, while BMW is introducing its longest-range electric Sedan and Ducati is set to unveil its adventure tourer bike. Let’s have a look at all three of them and get ready to meet them on our roads this year.

Tata has been selling only front wheel drive electric vehicles so far. Even their latest model Nexon and its EV version, come under this category too. With this on the side, Tata is set to unveil its first 4×4 SUV on 29th April 2022. The new E-SUV can be expected to be the All-electric Sierra that was unveiled by Tata in 2020 Auto Expo. The Sierra model which was a huge hit in the early days, is expected to come back as an EV with Tata’s own Generation 2 Architecture.

The Curvv coupe SUV Concept developed by Tata was the precursor to the Gen 2 Architecture and it is to be adopted in the new 4×4 SUV. While the exact launch date of Curvv is yet to be announced the company is excited about this electric 4X4.

With the rise of petrol and diesel prices in India, the demand for all electric vehicles is on the rise. The Indian market is highly anticipating Tata’s new EV vehicles to make a more profound impact on the market. This is due to the fact that Tata is consistently provided the Indian market with low-cost vehicles with comfortable quality. This, combined with an EV powertrain could be more than useful for the end-users. Expected to be priced around ₹14 lakhs, let us hope that the next week’s launch of the E-SUV will flip the tables in Tata’s favour. However, we can safely assume that the on road price of the electric SUV could be at least 18-20 Lakhs.

German carmaker BMW has recently unveiled the iX series of SUVs. Now it is time for the company to launch the luxury sedan with electric motors. The i4 Electric Sedan from BMW will hold the title for the longest-range EV in India, for quite a few months in 2022. With Mercedes Benz EQS and EQE yet to arrive in India, the BMW i4 with 590km range could be a head turner in Indian roads.

The i4 EV sedan will be available as two variants and they have been designed based on the 4 Series Gran Coupe. The base model i4 comes with the eDrive40 power train that can generate up to 340bhp with 430Nm torque. Field tests have concluded that this model will go from 0-100kmph in about 5.7 seconds. Pretty impressive, and quite BMW. The top variant comes with the M50 xDrive powertrain and it generates 544bhp with 795Nm torque. This higher power is because of the All-Wheel Drive system enabled in the top variant. With such a huge power output, the i4 can go from 0-100kmph in just about 3.9 seconds!

Both the variants are packed with a 83.9kWh lithium-ion battery pack and they have a range of 590km for the eDrive40 system and 510km for the M50 xDrive system. The estimated Price of the i4 EV Sedan comes around ₹80 lakhs, but it sure will be worth the price.

With only Jaguar providing a luxury electric sedan in the market, the demand for the i4 will be high. So, what do you think? Will BMW trump the competition from the Indo-British competitor?

Ducati will unveil its upgraded Multistrada 950 as the Multistrada V2, with a new clutch and an updated gear box on 25th April 2022. This version of the Multistrada is much lighter than the older one and it comes with a lot cooler features.

The L-twin engine which remains the same as the 937cc one will be coupled with a new gear box and a clutch. This significantly reduces the kerb weight of the bike by about 5kgs. The final weight of the models stand at 221.8kg for the standard version and 224.9kg for the ‘S’ variant. The new power train puts out 114PS and 94Nm, a clear 2Nm less than the previous version. However, the peak torque in the new V2 kicks in 1,000rpm earlier than before. Other improvements include, a 10mm lower foot pegs, 10mm lower seat height, and a new, narrower seat design, making it look sleeker and thinner.

We can expect the bike to rollout with 4 riding modes – Sport, Urban, Touring and Enduro and to be priced around ₹16 lakhs.

With three exciting launches in the coming week, the air is filled with expectation. It is to be noted that Maruti Suzuki had recently launched its facelifted edition of XL6 2022. Apart from these, Korean carmaker Kia & Hyundai are also launching their SUVs in the coming months. Toyota & Maruti Suzuki YFG and many more launches will give ample of choices for the average Indian customer.