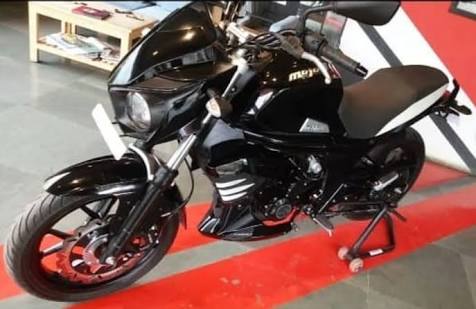 Our home player of two wheelers, Mahindra just unveiled the first look of Mahindra Mojo 300 BS6. It has already been said that the testing period is done way back. From the look of the trailer, we can say that we will be able to get our hands on it in the next 2 months. For the people who live under a rock, Mahindra launched Mojo 300 ABS in 2019 only, but the new variant will assure you a fresh look as far as design is concerned. The darkened look of the new model is appealing because it was a teaser they couldn’t reveal too much. The colour and some changes in design are there for sure.

The best thing about this new model is the addition of a single exhaust muffler. With the new instructions from BSVI emission, we can say the exhaust system will have an additional catalytic converter. The previous model BS4 came with 295cc of power, it also had a liquid cool engine which was fuel injected. The torque 28Nm with 5500rpm was enough for the rider and it could produce 26.30bhp with 7500rpm. The silhouette of the new model will be the same as that of BS4. Exhaust and engine changes will be there prominently. You can at least expect the power to not go down, it should stay the same.

It is most likely that the new Mahindra model will not do away with the twin headlamp setup. As far as suspension mechanism is concerned at the rear there will be mono-shock unit and at the front a collection telescopic forks. Disc brakes will be there on both the sides of the bike. You will get to ride on alloy wheels. Bajaj dominar 400 will be in direct competition with this new Mahindra Model which is said to be priced at 2 Lakhs.