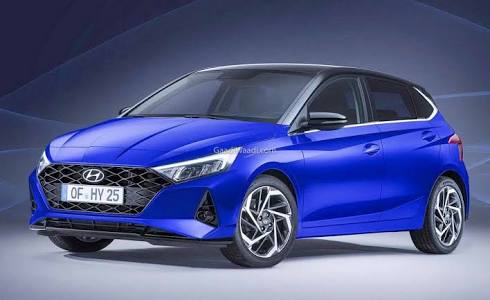 Recently we got to see the sketches of new i20, which were revealed by the company on their official social media handles. Now the company has unveiled the official images of the New i20, 2020, which looks really appealing and impressive than the existing version. The revealed images of the i20 show the overall appearance of the car. 2020 Hyundai i20 is all set to debut at the upcoming event Geneva Motors soon.

2020 Hyundai i20 is very much likely to lock horn against the Ford Fiesta, Volkswagon Polo and Maruti Suzuki Baleno. The vehicle features all-new designs which comes in a sporty look. The car will be featuring more aggressive front differently styles rear end and slightly bolder details. The vehicle appears to be shaper and bolder when we take a look at it from the front. It has received a new style grille and a new bumper which makes it look sporty.

The rear profile of the 2020 Hyundai i20 is covered by the new taillights, which gets an exciting design. If you look at the picture, you will notice a thin LED strip is connected to the tail lamps. The vehicle is going to be offered in dual-tone color schemes with an all-black roof, which looks quite impressive.

The alloy wheels of the car are very much attractive and look different. It comes with a new machined design which looks very bright and sharp. We are still not suing about the details of the interior, and it is going to officially revealed by the company in Geneva Motors soon. But it is highly expected that the 2020 Hyundai i20 is going to be packed with loads of new exciting features. It is likely to get the new design of the dashboard and a new central console. As per the latest reports, the cat is going to come with a connected car feature, just like Hyundai’s blue link.