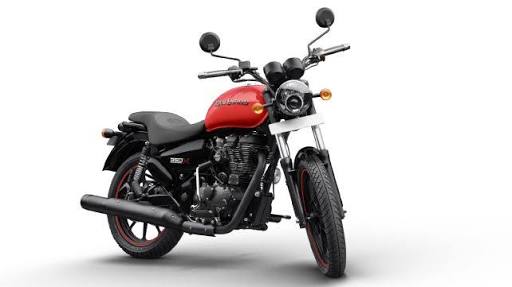 A new bike by the Royal Enfield was recently spied while it was out for the testing. As we saw in the pictures, it looks like a new generation Royal Enfield Thunderbird X. The design of the bike appears to be extremely appealing. Once it launches, it is expected to lock horns or go head to head against the Java 42.

The headlamp of the recently spied bike seems very much similar to the current thunderbird. Talking about the features, we got to witness the digital instrument clustor and V shaped alloy wheels. We also witness matte black finished engine and the shock absorbers in the rear. The New Royal Enfield Bike has become the talk of the town ever since it was caught on the camera. It is highly expected that the model will be based on the double cradle frame, which is also going to underpin the new generation RE Classic 350.

The seat of the bike looks pretty much different than other models of the company. It receives a single seat which is fatter as compared to the Thunderbird X. Another difference that we noticed in the bike is sleek stance. Turn indicators and the headlamps of the New Royal Enfield Bike are also slightly higher.

It is being said that the company is planning to launch a new bike which is going to name as ‘Royal Enfield Hunter‘. The company is planning to aim the youngsters and women riders to buy the bike. It is reported that is is going to be a capacity bike of 250cc which will share some of its styling from Thunderbird and the new generation classic. It seems like the bike is going to make a significant impact in the industry of Auto Mobile. Till then let’s see and wait how booming it is going to be in the Indian market.