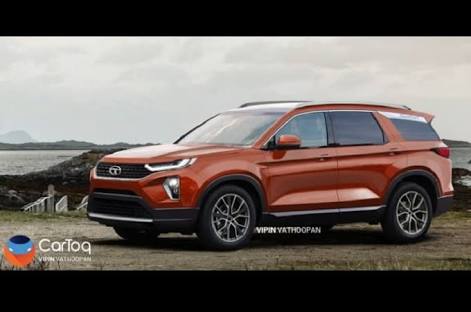 Tata Safari was first launched in 1998. Since its inception, it has spawned several loyal fans. However, Tata currently only sells the SUV of the Storme version.

The model is based on the X2 platform which derives powers from BS4-compliant 2.2.L Varicor diesel engine. Tata is all set to launch its rendering 2020 Tata Safari.

The rendered safari will be seen carrying some unique designs 2.0 which will be similar to the Harrier SUV. This model of the car is very special for Tata.

This is because as per recent news, Tata will be discounting the Tata Safari Storme with the implementation of the BS6 norms from 1st April 2020. The Tata safari will be considered as a replacement of the Tata Storme.

The 2020 Tata Safari is showcased as a rugged off-roading SUV which is entirely based on the modern impact design 2.0 philosophy.

It also comprises of the grill area with a tri-arrow bumper pattern which is the same concept of H5X concept.

The look of the model is complemented with several things such as:

1. Muscular when arches and huge big wheels along with the underbody plate protection.

5. roof nails which give a very sporty look

6. A lengthy wheelbase which ensures a roomy cabin.

There are speculations that the car has the potential to sit on the OMEGA (Optimal Modular Efficient Global Advanced) platform with its premium features.

Although Tata has not yet disclosed the price of the 2020 Tata Safari model, the price is estimated to be costing between Rs 11 Lakhs to 16 Lakhs. (introductory, ex-showroom India).

There are speculations that 2020 Tata Safari will be sharing its powertrain with the Harrier that is, 2.0L turbo diesel.

The model will be meeting the all-new upcoming BS6 emission norms. Tata will be offering both the transmission choices of manual and automatic.