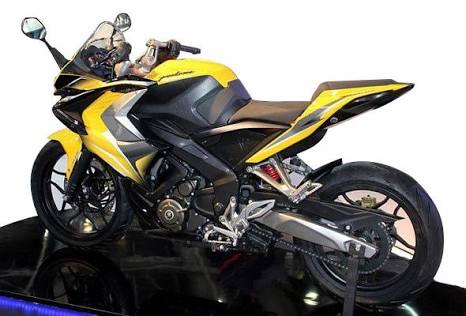 From the time Bajaj Auto came out with the Dominar 400, rumours have said Bajaj is developing a ‘cousin’ of Dominar 400. Then followed Pulsar NS 200. Bajaj showcased the Pulsar RS 400 in the Delhi Auto Expo in the year 2014. However, recently word has been doing the rounds about Bajaj being set to launch the RS 400 in Indonesia this year in August. The motorcyclists in the Indonesian markets are eager for the launch too.

Although the details revealed are few, RS 400 promises much more comfortable ergonomics, along with a lower saddle height in comparison to the RS 200, supporting riders with shorter height as well. This would attract a more comprehensive array of customers and enthusiasts. The RS 400 will have a new set of headlights and taillights and LED DRLs. Other than that, there will be split seats and split grab rails.

It will in all probability have the same cycle parts and engine as the Dominar 400. This implies that the RS 400 would also have the 373.3 cc single-cylinder, Triple Spark, BS6- a compliant power plant that produces 40 PS of power and 35 Nm of peak torque. The changes and upgradations are therefore more intensely focused on the style and very sharp design of the RS 400, to maximize its outreach.

There is also a fully digital instrument cluster, borrowed from the Dominar 400, with a sufficiently big windscreen. It is majorly, therefore, a performance bike. The RS 400 would also come with a 6- speed claw shifted gearbox. It is blessed with a mono-shock unit at the front and rear axle respectively, controlled by the front and rear disc brakes.

It can be expected that the necessary documentation in Indonesia is finished and they are going to launch the RS 400 in August 2020.