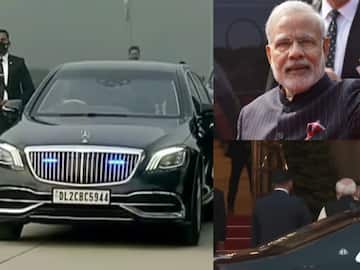 The social media and even the national news channels are going gaga over the latest addition to the fleet of the Indian Prime Minister, Narendra Modi. In spite of the controversy behind the news, whether the Indian Prime Minister needs such a costly vehicle during the present Pandemic and Economic situation or not, it has become a national debate for the past few days.

At a time, when the MPLADS and many other funds are being stopped in the name of fighting the global pandemic, the petrol and diesel price crossing ₹100 mark in the country and when the Dollar value is at its peak at more than ₹75, the country could do well with certain austerity measures. However, the prime minister has continued to amaze the country with new acquisitions again and again. Whether the 8000 Crore aeroplane or the 12+ crore car, he is always in the midst of attention.

Needless to say, that we don’t have any say in these matters but we have did a complete breakdown of the car behind the news, the Mercedes Maybach S650 Guard.

There is a long history behind the name Maybach. Maybach was started as a motor company by Wilhelm Maybach and it continued to be a subsidiary of the famous aircraft company Zeppelin until 1960. Daimler Benz acquired the company in 1960. It was not until 2002 that the Maybach returned as a standalone brand. After the global economic slowdown, in 2015, the brand was again moved under the Mercedes-Benz moniker. Now, the ultra-luxury cars are produced under the Mercedes-Maybach brand.

Maybach S650 Guard is the most luxurious and the safest vehicle to travel around in. Along with the usual top end features Mercedes provide with their vehicles, the Maybach version includes some cool & awesome guard features in it. While the Indian Prime Minister had already revamped the official fleet twice, in the past 7 years, this new acquire has created a huge backlash on the social media. On one hand the prime minister urges the public to follow austerity measures and buy locally made products on the other, he makes extravagant purchases. Prime Minister of the largest democracy needs to be secure and deserve the best car that is available but what has caused the furore is the timing of it.

Here’s a look at all the features about the Maybach s650, so you can add the vehicle to your future purchase. Yes, purchase. Seeing that any idiot can ride along in the car these days, you have a much higher chance to travel in it, than you can think of.

Unlike your regular car, Maybach’s don’t come in different variants. They come in different versions. Like, the previous version of Mercedes-Maybach coupe was the stunning S560. These vehicles are custom built for specification. Meaning, the automaker offers you a set of choices regarding the features to be added in the vehicle. You can select the options that best suits you in the long run. Also, there are plenty of features that come with the car. So, you have a lot of choices to make.

Besides the custom features, the car is loaded with some unique parts and processes from Mercedes.

The standard S650 is 5453mm long, has a width of 1899mm and it is 1498mm in height. It has a wheelbase of 3365mm and a kerb weight of 2200KG. Talk about being heavy! The enormous weight is because of the extra thick layer of armour added to the body and the windows. It can withstand bullets from most guns that are in use today. In fact it also protects the passengers from other projectiles such as armour piercing bullets, grenades, rocket propelled grenades, etc.

While, fuel tank doesn’t readily burst into flames in any car like they show in the Bollywood movies, the Mercedes Maybach S650 comes equipped with a self-sealing fuel tank. This reduces any chance of an explosion.

With all the added armour and weight, naturally, the vehicle comes with a lesser than usual mileage, of up to 7kmpl.

The Maybach S650 is powered by a 6.0-litre twin-turbo V12 engine that generates 630hp and about 1000Nm of peak torque. It achieves a top speed of 160 kmph. The car comes with an all-wheel drive system with a 7-speed automatic transmission.

The standard safety features included in the vehicle are many. Some of them include, 8 Airbags, Traction Control, Parking Assistance, Anti-lock Braking System, and Electronic Brake-force Distribution, Electronic Brake Assist, ISOFIX and more.

As for the interiors, the car has Multifunction Display panels both for the front and the rear seats. The pilot of the car gets the Adjustable Steering Column and a Multifunction Steering Wheel. Also, one of the cool features about the Mercedes-Maybach cars are that they have the best of all the technology surrounding automobiles, like the latest Sound systems, Navigation systems, Automatic Headlamps, Rain Sensing Wipers, etc.

The full list of features included in the latest version of S650 is long. But we can assure you, the vehicle is worth all the hype it gives off.

Of course, the on road price of the car. The Mercedes-Maybach S650 comes at a price of ₹12 crores. While, the price of the car is steep, the most people who require such protection and luxury are able to pay for it. A car that is especially made for royals and billionaires, Mercedes Maybach S650 is one of the best that you can buy. But hey, look at the bright side, you will never have to buy another car in your life again and you can pass on your car through your family for at least the next three generations when you buy this vehicle. Given that the conventional fuel lasts that long.

What do you think about the latest addition to the fleet of the Prime Minister? Is it a necessary one or could the huge outcry be avoided by properly timing the purchase?