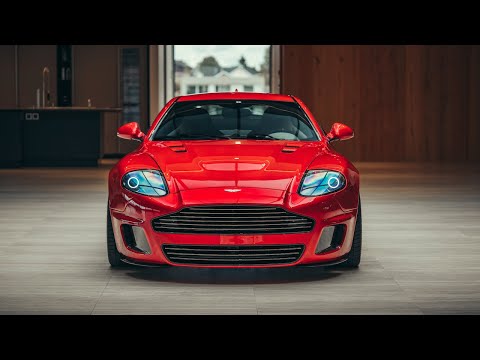 Aston Martin, the name pops up when you here about the 25th James Bond movie, ‘No Time to Die,’ as the carmaker had launched two 007 edition models as a tribute to the James Bond series. The movie will be released sometime in November 2020, featuring not less than 4 Aston Martin cars; the Classic Aston Martin V8, the iconic DB5, DBS Superleggera, and Aston Martin Valhalla.

At Concours of Elegance at Hampton Court Palace, Aston Martin revealed Victor, the all-new one-off Supercar built on the combination of One-77 and track-only Vulcan. Victor also takes inspiration from V8 Vantage and DBS RHAM from the 1870s and 1980s.

About the body, Victor has a muscular yet extensively modern look and is built on one-77 chassis and carbon-fibermonocoque. It takes over the dashing style from DBS V8 and Vantage. The vehicle is all painted with Pentland Green, which is also used throughout the cabin and outer body. The Victor offers impressive curves and fenders, front headlights with Vantage trademark, all-new well-shaped hood. Somehow, mixed and matched ethos girding the design blend in the muscular look very well. Victor contains a motorsports-driven steering wheel that adds to the charm even better.

About the Supercar’s capacity, Victor drives on a compatible powertrain and is powered by the same engine that ran one-77but the horsepower has been modified to 847 bhp. The impressive engine and power features would catch the mind of any car enthusiast; all this is beautifully also paired with the classic six-speed manual transmission gearbox. It is believed that Victor is the most powerful vehicle in the history of Aston Martin.

Victor’s existence was supposed to remain low-key as demanded by its anonymous client for whom the Supercar was built. But when it won the Future Classics at Concours of Elegance at Hampton Court Palace, it was impossible to hide.