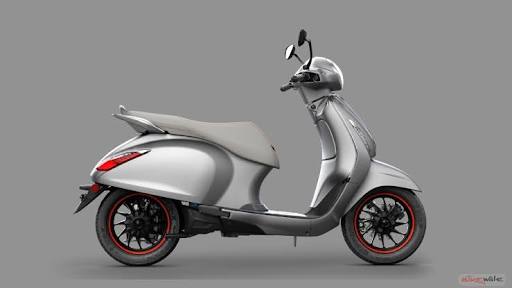 Back in the year od 2010 was the last time Bajaj Auto made a scooter which was called as Bajaj Kristal.

In the year of 2005, the iconic bajaj chetak scooters had rolled out. But the Pune based company is going to again enter the market of the scooter segment in India, especially the electric vehicle space.

Bajaj had been working with Urbanite from a quiet time now, and Urbanite is the new verticle in the company that will cater to the EV development. On the 16th of October, bajaj is officially announced the future of the brand.

The retro-styled camouflaged scooters is a promising exciting design, and the equipment will include 12-inch alloy wheels, tubeless tires, curved body panels. Digital instruments console and much more.

The suspension duties will be taken care of by the telescopic forks which are in the front and the single shock which is at the rear.

The scooters are expected to be loaded with the wizardry of the tech and are going to come with the smartphone connectivity, will have over the air updated and lastly it is going to introduce internet f things, which will add geofencing, tracking of location, remote start, find my vehicle and much more.

What will be the new scooter called? Will it have a dealership of its own?

The urbanite scooters, much like its rivals are expected to receive the Fame II subsidy and which will further help in the pricing and make them more attractive.

It is still unknown that the bajaj e-scooter will be sold under the same roof of the bajaj dealership or is going to have a new line of the dealership and the service centres.

According to the speculations the bajaj new scooter will be called as the Chetak Chic, the brand is famous among the Indians since time immemorial, so it will be a nice callback on the new e scooters plus it will be grand and a new chapter for the company.

Who is going to be at the unveiling event?

Lastly, the unveiling event will have the presence of the Union Minister Nitin Gadkari, and there is going to be NITI AAsyog CEO Amitab Kant, Rajive Bajaj who is the Bajaj Auto – Managing Director.