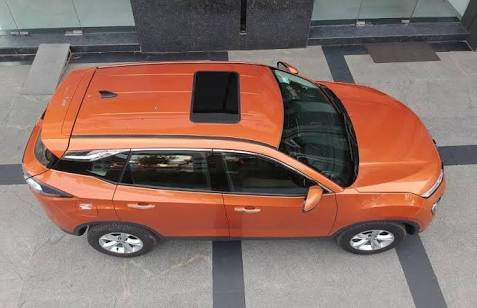 Tata Harrier was launched at the beginning of 2019 and gained a lot of popularity ever since the launch. The BS6 Tata Harrier was spied on the camera several times. We have seen leaked images of the car multiple times. Recently it was spied again, and this time we found out that the vehicle has something excited to offer.

The car comes with panoramic sunroof though Tata does not offer it for harrier, but it is going to provide a small version as an accessory. BS6 Tata Harrier comes with newly designed 18-inch alloys which looks excellent. Talking about the price, it starts from 13 lakh and goes to 17.37 lakh, which was quite expected. The cost of the BS6 Tata Harrier is 1 lakh higher now.

Tata is trying their best to sale the better amount of units. Last year the sale of the car was going in decline day after day because of the MG Hector. The release of MG hector created an immense impact on the sales of harrier. Back in that time, Tata even decreased the price of the car, but still, people chose MG Hector over Harrier.

Speaking on the sunroof, MG hector, which is the direct rival to the car, comes with a panoramic sunroof. Tat harrier is only available in 2-litre engine BS4. The engine of the harrier can deliver 170 hp in auto transmission and manual as well.

We can expect the launch of the BS6 Tata Harrier later this year in March 2020. Seems like the car is going to do well in the market.