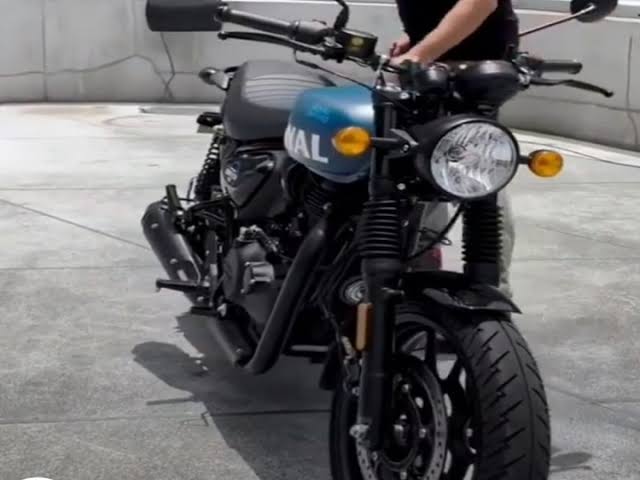 The Chennai based motorcycle maker, Royal Enfield has launched its new bike, Hunter 350 in India. The Hunter is a relatively smaller vehicle when compared with other bikes in RE’s fleet. The new bike joins the already full roster of the Royal Enfield bikes. Here are some of its outstanding features and specifications.

Powering the Hunter is Royal Enfield’s 349cc single-cylinder, 4-stroke air-oil cooled engine, along with fuel-injection tech. This is the same engine that powers RE’s Classic 350 and Meteor 350. The engine is paired with a 5-speed gearbox. The engine can produce a power of 20.2bhp at 6100rpm and 27Nm maximum torque at 4,000rpm. Royal Enfield claims that the Hunter can achieve a maximum speed of 114kmph. It can offer an overall mileage of 36kmpl approx.

With a top speed of 114kmph, Hunter is good enough for intra-city rides and for the occasional cruising tours. If you are looking for nerve-wracking speed, then you are looking at the wrong monster. Hunter 350 is not built for speed but for better ride quality.

Dimensions of the New Hunter 350

As we said before, the Hunter is a smaller bike when compared to its older siblings. Its wheelbase is just 1370mm long, much lower than the Classic 350 and Meteor 350. And, it is lighter too. It is 10kgs lesser than the Meteor and 14kgs lighter than the Classic. The seat height remains at 800mm and it has a fuel tank capacity of 13lts. The kerb weight of the bike stands at 181kgs and its ground clearance is at 150.5mm.

While the size of the bike is smallest in the Royal Enfield line-up, it is still not a minion by any standards. When all the accessories are fitted, the bike would be around a hefty 200kg. With a smaller wheelbase, it would be easier to manoeuvre the bike inside the city traffic. Similarly, it would also come handy during mild off-road rides. However, the ground clearance of the bike is not good enough to take long off-road trips. If you are someone who likes to rid eon the dirt, then you should try the Himalayan or the smaller version of the Himalayan, the Scram 411.

Suspension & Brakes of RE Hunter 350

Royal Enfield has fitted a 41mm telescopic fork at the front and 6-step preload adjustable twin emulsion shock absorbers in the rear. This system is good enough for a comfortable drive both on and off roads. Both the front and rear come with disc brakes. The front has a 300mm, twin-pot calliper disc, while the rear has a 240mm disc. Anti-lock braking systems are provided with all the variants of the bike.

The suspensions will provide good ride quality for the normal Indian roads and slightly worn off Indian roads. Even with twin emulsion shock absorbers, the near 200 kg of the bike and an additional load of at least 100 kg in the riders will only provide minimal shock absorption.

The Hunter has been given a retro look, with its first impressions coming from rounded headlamp and circular indicator lamps. The IVRMs and taillights sport the usual Royal Enfield look, with a circular design. The teardrop shaped fuel tank and the backed-up foot rests make the Hunter more of a roadster bike than a cruiser like the Classic 350. It is fitted with an analogue speedometer, but, the odometer, trip meter and fuel gauge are all digital.

The retro look of the bike doesn’t compromise on the latest advancements. The inclusion of the digital meters ensure that you get easier and more accurate information about the trip, fuel and other important things.

The Hunter 350 is offered as three variants, namely, Retro, Metro and Metro Rebel. They are all priced at ₹ 1.49 lakh, ₹ 1.63 lakh and ₹ 1.68 lakh respectively. The Retro variant of the bike could be the lowest priced bike in Royal Enfield’s fleet. As for the colours of the new Hunter 350, the company offers 6 paint schemes, Rebel Red, Rebel Blue, Rebel Black, Dapper Grey, Dapper Ash and Dapper White.

The on-road price of the Royal Enfield Hunter 350 could be from ₹1.60 Lakhs to almost 1.85 Lakhs depending on the place. That is a good price for the sturdy machine that you get. However the key question is, will the Royal Enfield stay ahead of the competition from Jawa, Triumph, and Honda?

Will the new Hunter 350 redefine the way Indians view the bullet? Or will it hit the company back? Only time can tell. What do you think? Do you like the specs and the price of the new Royal Enfield Hunter 350? Let us know your thoughts in the comments.