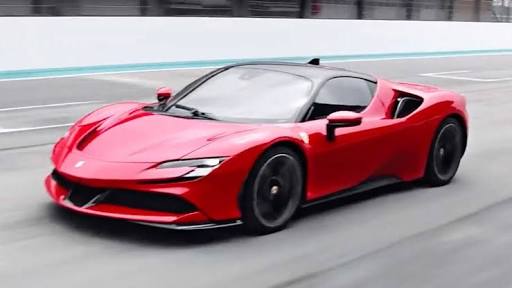 Ferrari EV is going to arrive in 2025 while the details of the vehicles revealed in patent sketches. The series of the sketches were first discovered by the US site taycan EV forum. The revealed plan view shows that the EV is likely to receive a two seat or 2+2 layout, short overhangs and a long bonnet.

As we have seen in the details of model’s four wheel drive powertrain, an electric motor will be connected to each wheel of the car. Apparently, it will be capable enough to operate independently and allows the ability to rotate on the spot. The technical details and performance of the car is still unconfirmed, there still not much information released yet.

The electric version of the Ferrari is expected to use the technology taken from the SF90 which pairs 4-litre twin turbo V8 along with a trio electronic models which is a combined power output of the 986bhp which makes it the company’s most powerful car on the road yet.

Ferrari is trying to follow the footsteps of companies like Porche, which has the Taycan 4-door electric vehicle that brought excitement to the industry of automobile due to its incredible performance. According to the revealed patent sketches, Ferrari’s First EV will not only be made up of 4 drive wheels, but it will also have reversible electronic machines. Talking about the hybrid system, the combustion engine of the car will be in the area where the battery pack should take place which is between the wheels at the back of the vehicle.

The revealed patent sketch is of course, not the final detailed sketch of how Ferrari electric vehicle will look like. But it is expected that the car will make a significant impact on the automobile industry once it launches in the market.