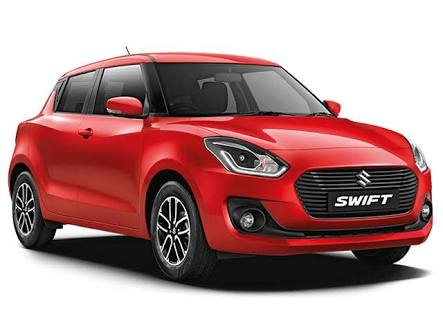 CarTechNewz-As per its launch price, the updated features on offer and the engine and transmission options available, the new Ford Figo seems to give a powerful faceoff to the Maruti Suzuki Swift.

While the American carmaker Ford is here with its updated Figo with some refreshing designs, new platform and tons of features, the Swift is already the market leader in hatchback segment.

The new Ford Figo was launched in the month of March this year with not only few designing and detailing changes, but also is loaded with a lot more features and is available in two petrol engine options.

It’s interesting to see how this new power package stands against similarly priced variants of the segment leader Maruti Swift.

So, should you buy the new Ford Figo or trust the market leader Maruti Suzuki Swift? Let’s dive into the specifications of the size proportions, engines options and prices of the two hatchbacks.

The 2019 Ford Figo looks the sportiest among the two. It has undergone changes to its exterior but has managed to retain its overall structure.

Along with a long wheel base and highest ground clearance, the new Ford Figo offers more legroom in the cabin.

But that doesn’t make the Figo a big car as Maruti swift beats it in terms of width and height. With the dimensions of 3840 x 1735 x 1530 mm, Maruti Swift stands as the widest and the tallest car among the two; thus indicating more shoulder room for passengers.

One of the highlights during the launch of the Ford Figo was the new three-cylinder petrol engines option – two petrol motors and a diesel one.

It also comes with a new manual and torque convertor automatic gearboxes. Its 1.2-litre three-cylinder, Ti-VCT petrol motor is capable of producing 95 bhp and 120 Nm of peak torque. Thus, stating its power in comparison to other hatchbacks.

The Maruti Suzuki Swift on the other hand is the most fuel-efficient, in both manual and automatic variants and is also available in both petrol and diesel variants.

The petrol model has a 1.2-litre K12B four-cylinder motor that pumps out 84 bhp of power and 114 Nm of peak torque.

The diesel variant, on the other hand, uses a 1.3-litre Multijet engine that produces 74 bhp and 190 Nm. While the AMT is an impressive part on the Swift model, the torque converter on the Figo is a better transmission.

Along with the impressive exterior and the new engines and gearboxes, the new Ford Figo also gets an updated features list, the most interesting of which is the new 7-inch touch screen infotainment system with navigation.

As Compared to the previous models, the new Ford Figo has reduced its price but it still costs more than the Maruti Suzuki Swift.

The two competitors are available with the same rate of interest as and no direct savings offers. Thus, Swift makes the most affordable choice of the lot.

As per the launch price, the updated features on offer and the engine and transmission options available, the new Ford Figo facelift seems to be a well-equipped and powerful rival to the Maruti Suzuki Swift.

But to sustain in the Indian Market with the rising prices on Petrol and diesel, The Maruti Suzuki Swift seems to be an affordable choice. Also, being the widest and tallest among the two, Maruti Suzuki swift stands as the best option to get together with your family and friends on road.