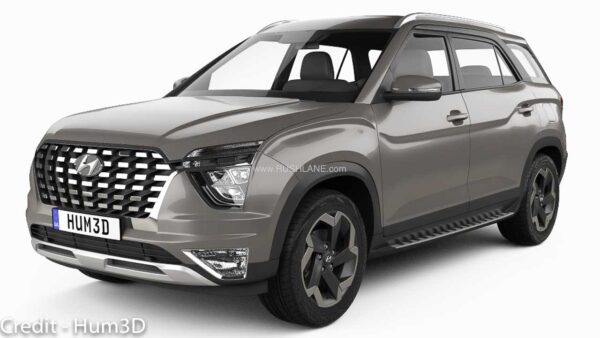 The global debut of the Hyundai Alcazar three-row SUV, as well as the announcement of its price, is now set for next month. Due to ongoing COVID-19-related lockdown restrictions in most Indian states, its rollout has been delayed forward by a month.

The Hyundai Alcazar will be offered in two different seating configurations.

Hyundai Alcazar:  what do we know so far

The Creta’s chassis, a few body panels, and many interior components are shared by the Alcazar. The new Alcazar is essentially a 6- or 7-seat version of the Creta midsize SUV. However, in order to accommodate the extra row of seats, it has been upgraded to have a longer wheelbase – 2,760mm (150mm longer than the Creta).

When you look closely, you’ll notice that the Alcazar has several slight aesthetic differences from the Creta. A redesigned grille, an updated front bumper, a prominent rear quarter window, new wraparound taillights, a somewhat more upright tailgate, false dual exhaust tips, and a larger set of 18-inch alloy wheels (vs. the Creta’s 17-inchers) are among the changes.

All of the Creta’s features are expected to be included in the Alcazar, including the 10.25-inch touchscreen infotainment system with Android Auto and Apple CarPlay, Hyundai’s connected car technology, a 360-degree camera, a panoramic sunroof, ISOFIX child seat mounts, wireless phone charging, automatic climate control, and more.

As previously stated, the Alcazar will receive an additional row of seats, which will be configured as either a 6-seat (with captain’s chairs in the second row) or 7-seat (with bench seating in the second row). The interior will be available in a two-tone colour scheme, and the captain’s chair version will feature a distinctive floor-mounted centre armrest with cupholders and additional storage.

Hyundai will provide both a petrol and a diesel engine option for the Alcazar in India. The petrol engine, which produces 159hp and 192Nm, is an upgraded and more powerful version of the 2.0-litre four-cylinder unit found in the Elantra and Tucson. The diesel engine will be the same 1.5-litre, four-cylinder turbocharged unit seen in the Creta, with 115hp and 250Nm, but tuned differently. Both engines will be available with a 6-speed manual or automatic transmission. To discover what it’s like to drive, check out our evaluation of the Hyundai Alcazar prototype.

The Hyundai Alcazar will fight against the MG Hector Plus, Tata Safari, and Mahindra XUV500, among others. Once the new Mahindra XUV700 is released in our market later this year, the sector is expected to become more competitive.

In June, the Alcazar will be joined on the market by the new Skoda Octavia.