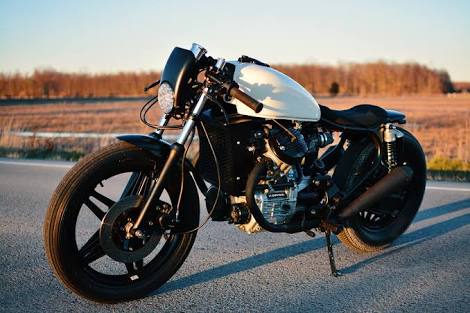 The Honda CX500 stays of those base bicycles that keeps manufacturers propelled. To be completely forthright, there is one bicycle emerging, and that is still Sacha Lakic’s version.

All things considered, this is a truly exorbitant machine. Be that as it may, to tweak a “poor men’s Guzzi,” you don’t have burned through a huge number of dollars.

Cam is a youthful, hard of hearing craftsman who adores the recognizable vibration of a motor in the task, and the smell of fuel skimming through the air as the machine takes you someplace new.

As far back as Cam discovered this squalid 1980 Honda CX500 bicycle in the small shed (which had been sitting in there for barely 10 years), he promptly bought it without the slightest hesitation.

He had an extraordinary vision for this bicycle manufacture and needed to change it into an imp and bistro racer blend. From the front to the end, he cleaved the measures, handlebar brace, back segment, airbox, battery holder, and the two bumpers.

When the CXwas “exposed” he needed to sit and retain all aspects of the floor and table, which gave him more thoughts for the fabricate.

He wound up hacking the bumper making it shorter, hand-fabricated a back bumper with a microstrip LED light underneath the back bumper, hand-constructed front, and back miniaturized scale LED signal lights, including a hand-manufactured battery box with an 8-cell repulsive force battery underneath of the bicycle which you may find in the photograph, and hand-assembled smaller than usual fairing simply over the fog light framework.