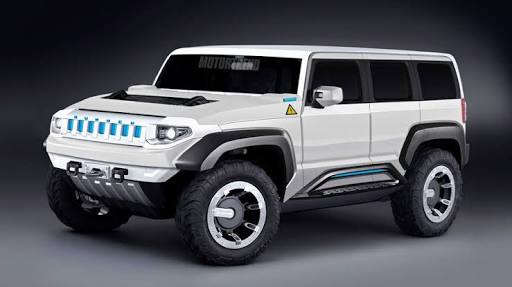 General Motors has officially confirmed that it is going to revive the nameplate of the hummer with an electric design, as seen in the teaser video. The new Electric Hummer will be introduced on Sunday during the super bowl game. The carmakers are going to feature a basketball superstar LeBron James, and they already purchased airtime for the ad. The company has confirmed the rumor which was in the air for a long time in the industry that it is going to resurrect the name of Hummer on the upcoming vehicle.

The company is best known for building capable and premium trucks, and the new SUV will take it to the heights. The electric truck version will be released globally in 2021. The vehicle will be sold under the general motors profitable GMC brand. The Hummer will be able to deliver the power of 1000bhp and torque of 15,500. IT can easily reach 100kmph in 3 seconds.

The released teaser shows that the vehicle has LED headlamps of the –hummer and newly designed grilles with chrome. After the launch, new hummer will go against Bollinger B1, Rivian RT, and Tesla Cyber truck. Other details which we could identify from the teaser is three orange maker lights. These mandated lights on the Hummer are obligatory for vehicles over 80 inches wide. This is the reason why we get to see the same on Ford F-150 raptor and heavy-duty trucks as well.

The company has only given few details about the vehicle, which will be unveiled on May 20. The new Hummer will have a massive battery to produce the equivalent of 745W. The Electric Hummer is capable enough to reach 60mph to 0 in just three seconds, which is quite an impressive job. GM has not released the price of the car and how long the battery can last on a single run.