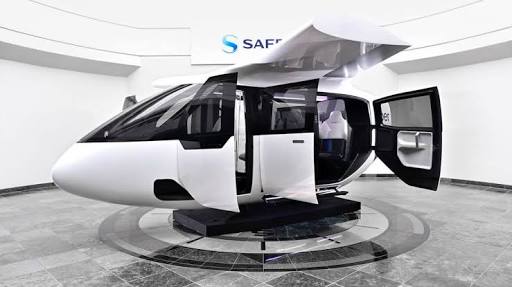 Flying cars have been a distant reality for a long time now, However, this has not dissuaded automakers who have been working on them for years. The latest one to join in is the Korean Company Hyundai Motors which in partnership with Uber has declared its plans of launching air-taxies in the coming years.

The Hyundai Motors displayed a full-scale model of its S-A1 aerial vehicle this week at the world’s largest Consumer Electronics Show (CES)  which is held in Las Vegas.

The company also presented designs for the ground-based infrastructural facilities which will be needed to support taxi services like that of Uber. This would require a “hub” with a landing pad on top, and an adaptive minibus called as “purpose-built vehicle” (PBV) by Hyundai.

This UAM is based on the concept of eVTOL(Electric Vehicle Takeoff and landing).

The S-A1 model displayed by the Hyundai Motors has five seats, including one for the pilot. It features multiple rotors,  to increase safety in case of any individual rotor failure. It also has parachutes in cases of emergency. Itis designed to cruise 1,000 to 2,000 feet above the ground at 180 mph and would take trips up to 60 miles and might also come in an autonomous mode that wouldn’t require a pilot at all.

The vehicle is built from lightweight carbon composite materials and features a technology-laden interior for the entertainment and comfort of passengers.

Uber’s partnership with  Hyundai, will draw on the automaker’s mass manufacturing capabilities to create a service that is both affordable and accessible.

However, building and operating flying cars isn’t as easy as it seems. There are various engineering, technical and operational challenges that will have to be dealt with. It would be difficult to build air-taxis following enhanced stringent safety measures, affordable technology to make the vehicle available for the common people, adequate infrastructure for takeoff and landing, low noise and air emissions and other concerns.

Nevertheless, carmakers are persistently working on this and it is said that Hyundai-Uber JV might demonstrate its first flying car in the year 2023.

Other companies that have already begun working on this are Boeing, Airbus and German start-up Lilium. Many others too are planning to join the line.

Analysts have also predicted that Air-Taxis will be common by 2040 with a global market of around $1.4 trillion to $2.9 trillion