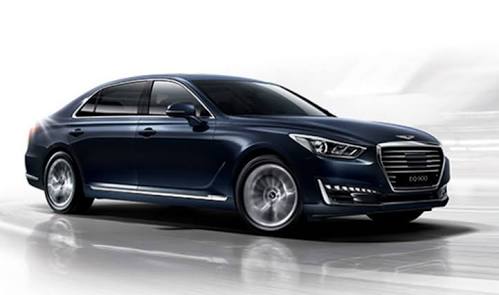 Hyundai Motor India Limited was formed in May 1996 by the Hyundai Motor Company of South Korea. Hyundai as a brand was always seen as the one producing cheaper cars.

In past years, however, Hyundai has worked hard and invested a lot of money in creating high quality but still highly affordable cars in order to bust this perception.

The current market capitalization of Hyundai is $34.2 billion and their sales revenue in the fiscal year of 2016 topped $77.81 billion.

The company’s success allowed it to purchase Kia Motors and now it owns over 33% of that company. These two form Hyundai Motor Group along with Hyundai’s luxury car brand Genesis.

In India, Hyundai leads in introducing safe and technologically advanced cars than their competition. Genesis Motor is the luxury vehicle category of the South Korean vehicle manufacturer Hyundai Motor Group.

Initially pictured along with the plan for Hyundai’s new luxury sedan Hyundai Genesis in 2004. Hyundai officially launched Genesis as its separate luxury car brand in 2015 with focus on markets like the United States.

In short, the Genesis is to Hyundai what Lexus is to Toyota. Now that Toyota has deployed Lexus in India, it would be intriguing for the South Korean automaker to check what its premium make can do in our market.

Hyundai India has been looking forward to launch Genesis in the country for quite sometime now, and a recent report hints that the project has finally been given permission to go ahead.

If things move quickly, the Genesis chief models could be exhibited at the Auto Expo 2020 to gather public opinion.

The market response to the soon-to-be-launched Hyundai Kona electric vehicle in the Indian premium segment would help the automaker understand the customer expectations.

This learning would go a long way in designing the strategy for Genesis.Save for the imposing front grilles, the Genesis sedans adopt an understated styling language which has nothing in common with the mainstream Hyundai models.It is only a matter of time before the luxury brand comes up with an array of SUVs in different sizes.

The vehicles are most likely to be imported as CBUs at least in the initial phase. Hyundai India anyways have the infrastructure for local assembly should it choose to do so.

Being a young luxury brand, Genesis would need aggressive marketing strategy to take on its rivals most of whom have rich history of several decades.