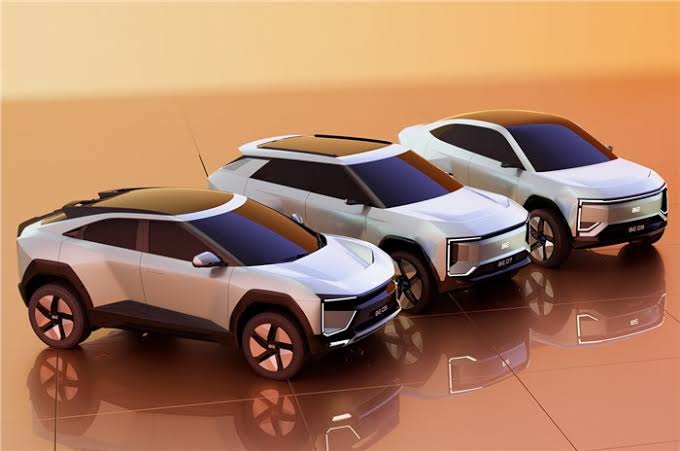 Mahindra has launched its all-electric sub-brands called BE & XUV.e and with them comes a hoard of new electric SUVs. The new brands will feature a new and aggressive design language. The BE brand will consist of three new EVs, namely, BE.05, BE.07 and BE.09. While the XUV.e will have two models, the XUV.e8 and XUV.e9. It is to be noted that Mahindra had recently teased the 5 models in early July.

With these five EVs Mahindra has kept up their promise of introducing five new vehicles in the month of August 2022. Of the two brands, the XUV.e will come out to the roads first, with the launch of XUV.e8, in December 2024. This will be followed by the BE models in October 2025.

Now, let’s have a look at the features coming with the BE cars first.

The BE.05 boasts an aggressive design in the front. The angular C-shaped headlights and large air dams add to the futuristic look of the SEV. There are plenty of sharp cuts and creases visible in the design and the air-duct, is prominently visible too.

On the sides, we can see large wheels and squared-off wheel arches. Also visible is a sloping roofline that merges neatly into the chunky rear-end. The door handles are placed on the top of the door and it doesn’t seem to interfere with the shoulder line of the SEV. This could add to the aero-dynamics of the car in a good way. In the rear, we can see a heavily styled bumper and above it is an upright, C-shaped tail-lamp.

Inside the BE.05 is a neat cabin with a twin touchscreen system. A large gear selector separates neatly the driver cabin from the rest, giving the vehicle, a driver-focussed look from the inside. While Mahindra has not yet revealed the price of the car, we can assume it to be over ₹15Lakhs. It will be competing against Tata Nexon in the market.

Details about Mahindra BE.07

The production version of the BE.07 will be launched in October 2026. This could be called a traditional SUV, since it sports a sharp headlamp and tail lamp design. The BE.07 is marginally larger than the BE.05, with its dimensions measuring, 4,565mm in length, 1,900mm in width and 1,660mm in height. It has the same wheelbase as that of BE.05, 2,775mm.

The large wheel arches and flushed door handles on the sides, are similar to the BE.05, but it misses the edgy look from the former.

The inside of the BE.07 is much more sophisticated, we would say. We can see a larger screen, that covers the full length of the dashboard, similar to the EQS from Mercedes-Benz, but, not comparable in the least. It also sports a large panoramic sunroof and very little button controls. Mahindra seems to give this SUV, a fully touch and haptic control system on the inside.

This home-grown model will have a tough competition from the Tata Curvv and could be priced around ₹20 Lakhs.

The top-end vehicle from Mahindra’s BE line-up is similar to the BE.05 model. It features a sloping roof-line which gives it a Coupe look from the sides. The company is yet to reveal the dimensions of the model, but its design seems to be impressive.

The BE.09 is like the Coupe version of BE.07, and has a more upright front design. It is said to be a four-seater and more details are expected for this model.

We can expect them to be unveiled after the launch of the previous two models by the company. Expecting the usual naming convention of Mahindra, where larger the number, larger the vehicle is, we can assume Mahindra BE.09 to be larger than BE.07. However, the rumour of the 4 seater, makes it an ideal successor to the Mahindra E2o.

Competition for the Mahindra BE Line-up of Vehicles

It will take almost 3 years for the Indian automobile giant, Mahindra to launch all the upcoming models. However, in the coming three years, the industry will change so much with the entry of other players and new models from existing players. For one, Ola is pushing its entry into the nascent market. Although, we are not sure of the Tesla, the electric vehicles market in the country is already getting many models. The only player who is yet to launch an all-electric model is the Indo-Japanese giant, Maruti Suzuki. We can expect Suzuki to also come with its own electric vehicles in 3 years’ time.

Whatever happens to the chances of Mahindra, the average Indian customer gets ample of choices and a good line-up to choose from. So, what do you think about the Mahindra BE series of vehicles?