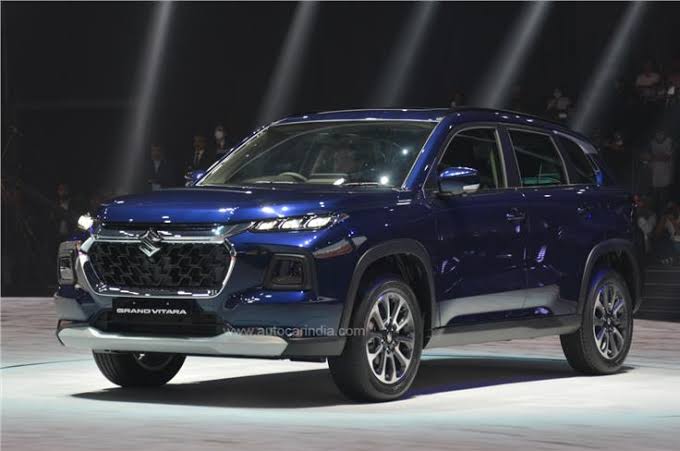 Maruti Suzuki has released the price list for its feature-packed compact SUV, Grand Vitara. The new vehicle will come with a lot of customisation options on powertrains. The new SUV will come with a strong hybrid option, a mild-hybrid option and even an all-wheel drive option, each with their own price tag. This customisation offers, the company believes, will enhance the appeal of the model among the customers. Maruti Suzuki is already the largest carmaker in India & the brand enjoys a great loyalty from the Indian customers.

Here are some features about the new SUV,

The petrol only variant of the Grand Vitara will be powered by a 103hp, 1.5-litre K15C petrol engine which comes mated to either a 5-speed manual or a 6-speed torque converter automatic gearbox. Maruti claims a mileage of 21.11kpl for the manual variants, 20.58kpl for the automatics and 19.38kpl for the manual AWD variant. The AWD system will be available only in the top-end mild-hybrid manual variant.

As for the hybrid powertrain, a 92hp, 1.5-litre, three-cylinder Atkinson cycle petrol engine will be paired to an electric motor that produces 79hp and 141Nm of torque. This hybrid powertrain makes a combined 115hp and it is paired to an e-CVT gearbox. The company claims an efficiency of 27.97kpl for this powertrain. At any rate, the Grand Vitara compact SUV provides perhaps the best fuel efficiency & mileage in the class. While these numbers are only claims by the company and the exact efficiency will have to be checked in the real world conditions, it will still be much higher than the competition.

The Grand Vitara borrows some of its looks from Toyota HyRyder. But there are a few stand-alone features given to it by Maruti Suzuki. Features such as a large, chrome-lined hexagonal grille, three-point LED daytime running lamps, bumper-mounted main headlamp cluster and a large sized body cladding, all make up the unique look of the compact SUV.

Also, each variant and trim will get a customised set of features in them.

Maruti Suzuki is pushing this new SUV to stand out as a petrol-only vehicle, just like they did for Brezza. The company is using their engine’s efficacy and mileage as the selling point for this new trend. Although diesel powered SUVs are most preferred by the Indian customers, Maruti Suzuki is confident that their varied powertrain options will get the traction on sales. The company also hopes to see its strong hybrid Grand Vitara as a replacement to the diesel midsize SUVs. Another important reason why petrol vehicles is regaining the relevance in the Indian automobile market is the low difference of fuel cost in petrol and diesel. While the cost of fuel itself is not much, the cost of diesel engines are much higher than the petrol ones. Moreover, when the whole industry is moving towards smart hybrids and electric engines, petrol seems to be the logical one to go with.

It is to be noted that the petrol-powered Brezza did see a dip in sales when it switched from diesel to petrol. But it made a recovery in sales and even went on to become the top selling SUV.

So, what do you think? Will the Maruti Suzuki be able to recreate the Brezza magic with the Grand Vitara too? Let us know your thoughts in the comments.