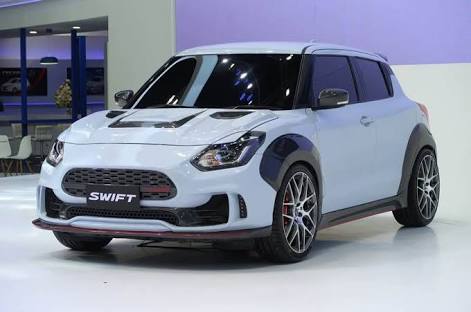 Suzuki, the Japanese carmaker has finally showcased the extreme concept of Suzuki Swift at the Thailand International Motor Expo, 2019. Suzuki’s upcoming model will give a tough competition to various models such as Ford Figo and Hyundai Grand i10 Nios.

The swift model is manufacturers very old and popular model which has been on sale since 2005. The third-generation model was launched at the 2018 auto expo. Swift has remained as a strong backbone for Maruti Suzuki in the home country and has come under the top 10 selling cars in India very regularly.

Suzuki has made sure to get an all-new premium designing for its upcoming swift model. The entire styling and designing look extremely sporty with several elements added such as:

1. Grille which comes in a smaller mesh design which gives the car a very sporty look.

3. Headlamps which come up with body-colourer extensions of panel

4. An element of lip spoiler which comes with a red colour headlight.

The centre of the bonus comes up with a black trimming which adds overall to the very sporty appearance of the car. The fenders have also been made with a gloss-finished at the side of the car which resembles the cladding on the SUV. The similar cladding can be seen on the door sills as well. The upcoming model will be seen with pronounced wheel arches which come up with alloy wheels (multi-spoke).

At the front of the site, the concept of Suzuki Swift Extreme comes up with a whole new idea. The bumper comes with a diffuser faux element, a very prominent black roof gloss mounted spoiler, a trim gloss black which runs between the tail-lamps and exhaust with some integrated exists (squared-out).

In the home country, the upcoming model will be seen with two options, a 1.2L petrol and a 1.3L Multi-jet Diesel engine. While the gasoline will be seen meeting the BS6 norms. The company has planned to discontinue the oil burner.