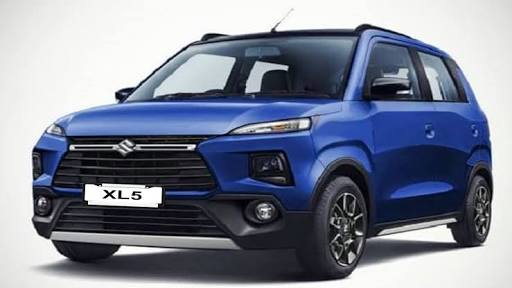 A few spy pictures confirm that all the new XL5 will rightly carry a stance resembling the standard WagonR. Ideally, the rear profile will look almost similar to the door sibling. The majority of the changes will appear on the front end of the car. The new model comes up with premium design features. It will feature a revamped bumper and a newly designed grille.

The significant difference can be marked with LED DRLS. Resembling the XL6premium MPV, it is the premium version of the wagonR that might get LED taillamps. The exclusive colored offered on the XL5 premium hatchback is the NEXA blue color. Currently, the interior details of the car aren’t revealed as of now. Though most likely, it will share a resemblance to the typical WagonR. The carmaker is most likely to introduce seat upholstery, trim and extra features on the model lineup.

While the buyers expect it to be loaded with additional features, including a touchscreen infotainment system along with smartphone connectivity, keyless entry, tilt-adjustable steering, multiple airbags, power windows, ABS with EBD, central locking system, speed alter the order and rear parking sensors. The premium version of the WagonR is most likely to be the same on the engine front as it will include a similar B56 compliant 1.2L, four-cylinder K-series engine that resembles more or less the standard model. The new model also features a power break of 77bhp against 113Nm of torque. The Maruti XL5 is similar to WagonR, as it is most likely to feature a 5speed manual with an AMT gearbox option.