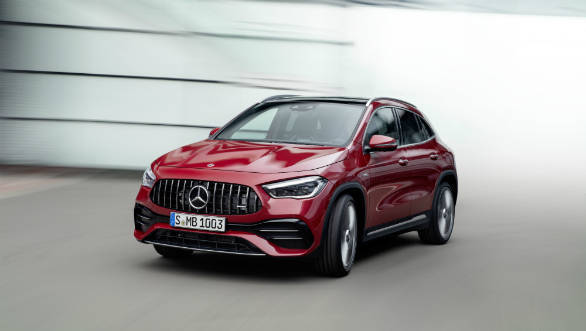 Mercedes-performance Benz’s sub-brand, AMG, is expanding its presence in India. Not only has AMG begun assembling its mid-range cars and SUVs in India, but it also plans to introduce one locally assembled mid-range version for each major Mercedes model sold in the country.

Mercedes-Benz first introduced the 350hp V6-powered AMG GLC 43 in India in November 2020, followed by the four-cylinder, four-wheel-drive A35 sedan earlier this month. The Mercedes-AMG GLA 35 4Matic, with identical specifications, will be released at the end of the month.

Exterior and interior of the Mercedes-AMG GLA35 4Matic

On the outside, the Mercedes-AMG GLA 35 4Matic does not appear to be significantly different from the stock GLA, however, closer inspection reveals significant variations. A Panamericana grille with prominent vertical slats, a new roof spoiler, and new tailpipes are among the changes. The GLA 35 badge sticks out around the back, and there’s also an AMG badge. The latest GLA is 4,410mm long, which is 14mm shorter than the previous model but 104mm higher. Its wheelbase has been increased by 30mm to 2,729mm, based on the second-generation MFA model.

Engine and suspension of the Mercedes-AMG GLA35 4Matic

The GLA 35 has a turbocharged 2.0-liter petrol engine with 306 horsepower and a 0-100kph time of 5.1 seconds. The crankcase is made of high-strength, lightweight die-cast aluminum to minimize weight, and a twin-scroll turbo is used for maximum responsiveness at low and high engine speeds. Variable valvetrains, high-precision piezo injectors, and multi-spark ignition are among the other features.

The suspension on the AMG GLA 35 is calibrated for high cornering speeds and therefore has a low tendency to roll. The four-link rear axle is rigidly attached to the body through the subframe, and the AMG-specific front steering knuckle is identical to those used on track cars.

Price and competitors for the Mercedes-AMG GLA35 4Matic

Along with the rest of the GLA series, the Mercedes-AMG GLA 35 4Matic will be released towards the end of April 2021 for an estimated price of Rs 60 lakh. The GLA 200 petrol has 163 horsepower, the GLA 220d has 190 horsepower and the former has a four-wheel-drive AMG-line variant.