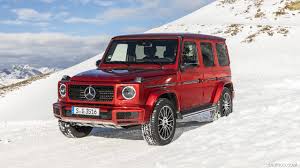 The brand whi3ch has been dominating the luxury car market of India is Mercedes Benz. Mercedes is planning to and is keen on building up the strength in the Indian market by launching the new iconic G-Wagon or the G 350d in India.

All you need to know about the G350d!

The G350d is powered by a 3.0-litre engine, has an inline six-cylinder motor that is belting out 282 bhp and a torque od 600 Nm, the car is paired with a nine-speed automatic transmission.

But the on-road dynamic and the power of G350d is not equal to the G63 AMG as the G63 is a performance-oriented model. And the G350d is an off-roader and comes with solid off-roading equipment.

The car has a feature like differential locks for the front, and the rear axle has a permanent four-wheel-drive system and has gas-filled shock absorbers.

The G350d looks a bit subtle in comparison to the G 63 AMG, both the cars have the same boxy silhouette and are like identical twins (almost).

But the understated appeal is there on the grille and the bumpers. The inside design and the layout are similar.

But it is equipped with a dual-tone beige and black finish, the customers will get a choice of trimming the options for the insets .

In terms of the equipment on the inside it is pretty loaded it also has the Mercedes latest 12.3 inch touchscreen that integrates with the infotainment screen has instrument cluster together, and comes with the latest MBUX system

But it is being said that the car will get a fierce competitor from the land rover which is all set to arrive in the Indian markets next year, and it is going to be a worthy competitor to the G wagon