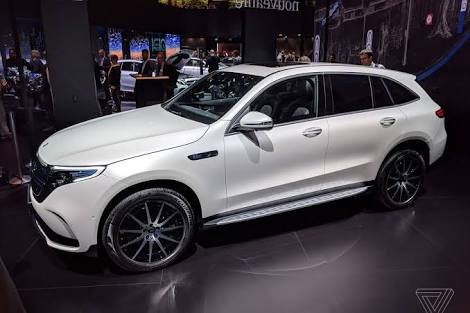 It has been reported that the Mercedes is gearing to roll out the EQC electric SUV in the market of India. The launch of the SUV is going to take place somewhere in the second half of 2020. Mercedes showcased an array of the car in Auto Expo 2020, which was conducted back in February at Delhi. Mercedes EQC’s electric SUV was one of them. The SUV was scheduled to be launched earlier, but as per the reports, it has been hold-up. As it was seen in the images, it features a gloss black grille along with the wrap-around headlights. It appears to be exceedingly appealing, which can easily grab the attention of numerous people.

Talking about some more features in the exterior of Mercedes EQC electric SUV, the strip of LED daytime running light and the stretches placed on the front upper edge of the grille makes it look astounding. It will also offer an LED light bar, LED taillights at the center. Coming to the interior of the car, it has received a freestanding digital display for the instrument cluster and an infotainment system of the MBUX. The steering wheel of the SUV is spoke 3 multifunctional. A total of 5 people will be able to sit in the car comfortably.

There will be two electric motors in the Mercedes EQC electric SUV, which are placed on the axle. Together, they will deliver a combined output of 402 bhp and a peak torque of 760 nm. The battery equipped in the SUV comes with the 80 kWh lithium-ion. The company has claimed a range of 445-471 Km. It has also been claimed by the company that it will be capable enough to accelerate 0-100 km/h in just 5.1 seconds. The top speed of the SUV will be 180 km/h.