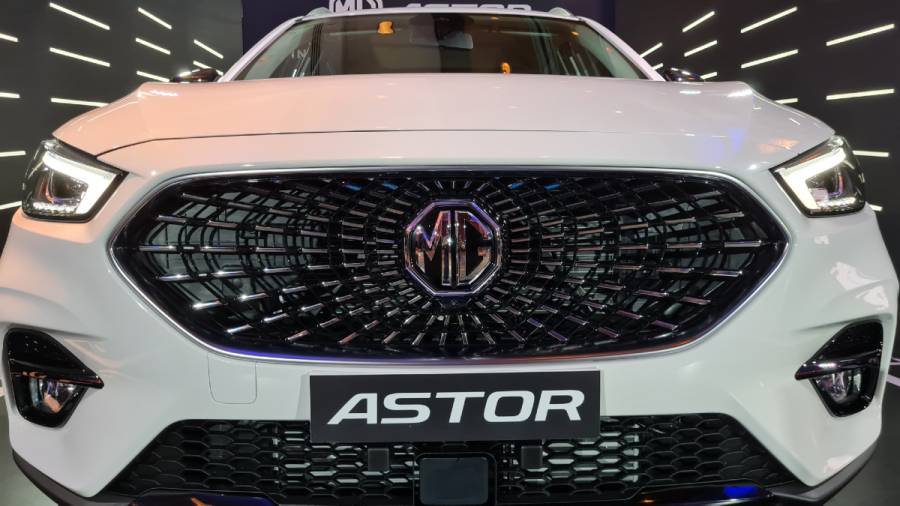 British Car maker Morris Garage has carved out a niche for itself in the country. The brand, like Mahindra concentrates mainly on the utility vehicles. If MG Hector has revolutionized the features available in the segment and the MG ZS EV is the only car that gives a tough competition to the home borne compact SUV Nexon, it is the launch of MG Astor that has made the news in the industry.

MG Astor is the petrol version of the previously launched MG ZS EV. However, it is not just that. While the new car is based on the same platform and borrows heavily on the styling and structure of the vehicle, it is a breed apart from the ZS EV. MG Astor will be launched in the first week of October, mostly on 7th, October. The brand is yet to unveil the final price of the vehicle but it will undercut the price of MG ZS EV. So, you can expect a price range of ₹10 Lakhs to ₹17 Lakhs for the variants.

MG Astor is the first car from the brand to have an AI assistant inside the car. The AI assistant, named as Hello Astor can amuse you with quirky jokes, educate and engage you with trivia as it is connected with Wikipedia. However, the AI takes a bit of time to speak, train and learn the accents of the driver. An important let down of the AI, Hello Astor is the fact that it can’t search for things on Google and provide the answer for you. Nevertheless, the capabilities of the AI is far better and it can control most features in the car.

MG Astor is equipped with the Level 2 ADAS, Advanced Driver Assist System. Coupled with the safety features and the intelligent sensors and radars, it is truly a car for the future. The cars from Sci-Fi movies have come to the real world in the form of MG Astor.

The radar detects objects like cars, obstructions on road, smaller vehicles and even cycles on the road and protects your car from collision. The cruise control helps your car to maintain the uniform speed and movement on the highway. The speed control is an adaptive control mechanism that can be used in a number of settings. Either to give you the feedback when you fall much below or go past the chosen speed. It can also be set to reduce the speed every time when we try to go past it. In fact, with the help of the on board cameras, the MG Astor can read the signs on the road and then change the speed of the car as per the speed limits on the sign board.

MG Astor is the first compact SUV to get all these features and since the suggested price is similar to that of Hyundai Creta and the Kia Seltos, MG Astor will easily beat the competition by a huge margin.

The only other car with the ADAS in the Indian market as of now is the newly launched XUV 700.

It seemed like Mahindra is running out of naming ideas and uses the same naming like how the Bajaj has essentially used the same Pulsar branding for a number of wholly different motorbikes. Although, on first looks it seemed like Mahindra is making an elaborate facelift with topical changes for the previous generation XUV 500. However, on a close inspection and trial, it is clear that XUV 700 is based on the XUV 500 but definitely of a whole different league.

On the exterior the changes start with the new logo of the brand. The new logo with separated hills of M resembles a butterfly. It is so symbolic that the Mahindra has finally moved out of the cocoon it has weaved around itself. With the launch of XUV 700, the brand has fledged its wings and has brought a truly world class product at the Indian price. With a starting price of just over 12 lakhs, XUV won’t disappoint you.

The Advanced Driver Assist System provides a range of features like the MG Astor. However, all the safety features and premium features come in a powerful 7 seater. Even on the interior, the new XUV 700 feels plush. It has a new leather like upholstery on the inside with a long instrument cluster. That cluster is heavily inspired from the luxury vehicles and it gives a cool look to the inside of the car.

The SUV is not only longer than MG Astor but also more powerful. While they both are of different segments, it is to be noted that both the cars will have almost similar pricing and in the Indian context they both could easily become competitors.

Both the cars have similar safety features, wide and long sunroofs, ADAS and many common features. One unique design of XUV 700 is the retractable door handles that opens when the car is unlocked. The retractable door handles close once the vehicle is locked or when it moves faster than 30km per hour. XUV 700 uses Alexa system to control the systems of the car and the voice interaction could use an upgrade.

MG Astor is one of the first cars in the Indian market to come equipped with an artificial intelligence and it will amaze the compact SUV drivers for sure. The car lacks a little bit on the power. However, for most city drives, it shouldn’t be a big issue.

The newly launched XUV 700 feels muscular and powerful and there is nothing to find fault with. Both these cars will definitely decimate the competition from other cars like Kia Seltos, Volkswagen Taigun and Skoda Kushaq. What are you waiting to buy?

Do you want the compact but fully loaded MG Astor or the spacious but stronger XUV 700?