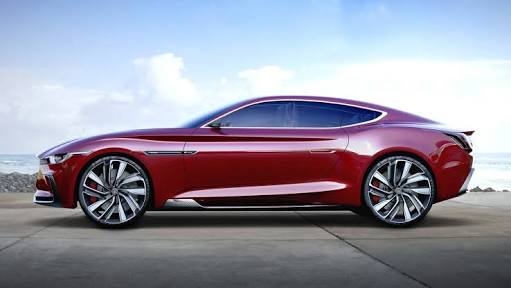 The British automotive manufacturer MG which recently brought its two-cars in India that is the MG Hector and the MG ZS EV, both of them were dependable vehicles, and the company plans to make its presence known in the subcontinent in the future. MG is also known to be developing another electric vehicle known as the MG E-Motion. It will be a sports coupe, and its concept car was displayed in the Shanghai Auto Expo in 2017. Though it has been so many years, a patent has surfaced online recently with a similar design and a few changes to the MG E-Motion.

The company has pushed the production date back by 2021 to launch the vehicle. The patent shows the car to be quite different from its prototype and certainly makes the car more beautiful. The renders show that it will feature a slender sports back design. It seems to be a fusion between the old Mazda cars and Aston Martin series. The front design is entirely new with a familiar silhouette. They have moved the false grille to the bottom with a new curvy headlight design making the car more appealing.

The rear headlamps are a little higher than the prototype giving it a more aerodynamical look; there are changes to the boot lid with a toned down bumper. The patent doesn’t say anything about the interior of the car, but we know because of the concept car that it will have an all-digital interior with the latest car tech.

MG E-Motion looks stunning from the inside with beige leather seats. The engine capabilities are unknown, but it will join the MG ZS EV electric vehicle series. MG E-Motion boasts of going from 0-100kmph in under 4 seconds and will have a battery that can last up to 500km on a single charge. MG E-Motion will be the first all-electric sports car produced by Morris Garages.