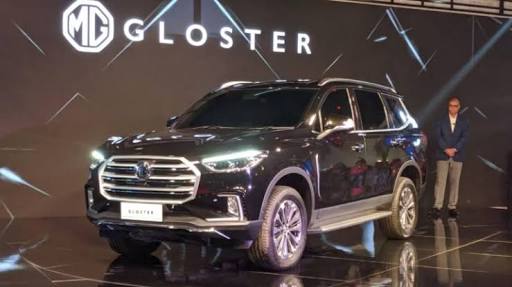 MG came up with 14 all-new cars at Auto Expo 2020. MG has revealed its new model called MG Gloster at ongoing Auto Expo 2020. The company also revealed Marvel X, Hector 6 seater, HS SUV, Vision I concept SUV and many more at the motor show. The MG Gloster is based on Maxus D90, and it’s much bigger than other cars SUVs like Fortuner and Endeavor.

The car is imposing when it comes to size. Coming to the dimensions of the car MG Gloster measures 1,875 in height. 5005mm in length and 1932 in width. The SUV is 40mm taller, 77mm wider, and 210mm longer. The vehicle has a wheelbase of 2.950mm, which is 205mm and 100mm longer than Toyota Fortuner and Ford Endeavor. The Car is expected to launch in the end of this year or earlier in next year.

MG Gloster will offer three rows of seats. The vast proportion of the car are amplified by the gap in its grill and the imposing stance. The alloy wheels of the car also look pretty impressive, and the company has offered 19-inch diamond-cut alloys. In terms of the engine of the SUV, it will provide powertrain, just like the Maxus D90 in China.

There is no doubt that the appearance of the car is extremely amazing because of its dimensions and outer features. MG Gloster will be available in the seating configuration of 7 (2+3+2) and 6 (2+2+2). The estimated price of the car starts Rs 27 lakh, which was quite expected. It looks like MG is all set to take over the Indian automobile industry with new launches in the future.