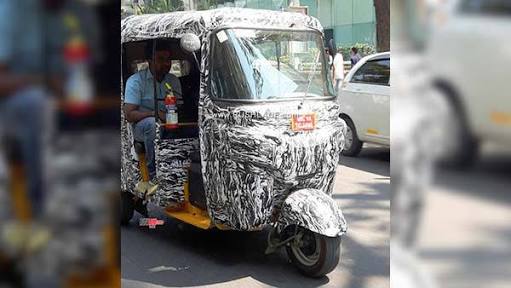 Bajaj E-Rickshaw has been spotted many times while testing. The company is going to launch its first electric three-wheeler very soon, and it will be known as RE EV. It was first showcased by the company in MOVE summit 2018. Bajaj RE EV will be the part of Bajaj’s sub-brand that is Urbanite. The electric rickshaw will be priced at around Rs. 2.5c lakh.

As we saw in the pictures, RE EV looks highly camouflaged. The design of this electric rickshaw looks very similar to any conventional rikshaw. The company claims that their electric three wheelers RE EV will be able to offer a range of 120km in a single charge with a top speed of 45km per hour. The electric rickshaw is capable enough to carry four people.

Bajaj RE EV is going to compete with the Mahindra Treo, which will be offered in 4 configurations. Bajaj RE EV is still quite a time away for being launched in the country. Bajaj RE EV is the best performing segment in the sales of EV, and most of the manufacturers are looking forward to stepping into the game by watching the success of low-cost Chinese imports.

Once the electric rikshaw releases, it will make an significant impact because currently, over 50% distance traveled in our country is on three and two-wheelers.