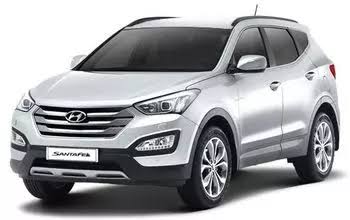 Recently Hyundai had revealed the engine details of the new Santa Fe SUV. The new Hyundai Santa Fe will feature petrol-electric and diesel engine options. The SUV is based on a third-generation architecture which hinges the US market Sonata Sedan. The all-new SUV 2020 for the first time will come with hybrid and plugin hybrid powertrains for the first time. The model also features 60Bhp electric motor and 1.49kW lithium-ion battery coupled with the new Hyundai’s smart stream 1.6 liters turbocharged four-cylinder petrol engine.

The latest version 4WD PHEW will be made available in 2021. It also features 91bhp electric motor combined with a 1.6-liter engine to produce a combined output of 265bhp and 350nm. The battery claims to offer 64km every charge on the NEDC cycle. The car will receive a six-speed automatic gearbox. The new Hyundai’s SUV features a 1.6-liter Smart Stream petrol engine that uses a newly developed technology known as Continuously Variable Valve Duration (CVVD) technology. The new engine is claimed to offer 5% higher fuel efficiency and 4% higher performance.

A 2.2-liter turbocharged diesel engine will power the car’s diesel version. The powertrain includes reshaped camshaft, aluminum block, and a higher-pressure injection system that helps the brand in reducing 19.5% weight. Ideally, the power is transmitted either to all four wheels or front wheels through a new eight-speed dual-clutch automatic gearbox. The engine is capable of developing 202bhp of power along with 441Nm of torque.

In the European markets, the new 2020 Hyundai Santa Fe will be launched in the second half of the year. For the Indian market, the Korean automaker recommends the Palisade 3-row full sizes SUV. Therefore, both front and four-wheel drive will be on offer for buyers. The upcoming model of Hyundai has already become super popular in the market due to its added features and design.