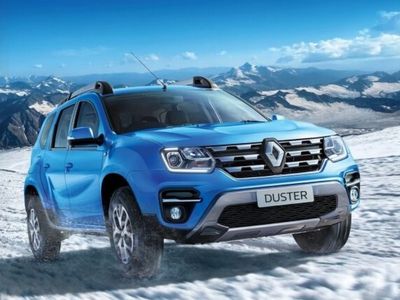 The new Renault Duster Turbo Petrol is set to hit the streets this month. The new Renault Duster turbo petrol will be one of the most powerful mid-size SUVs in the country. The engine, which is a 1.3litre turbo powered petrol engine, will produce a torque of 250Nm and power of 156hp. The styling of the
new model will be similar to previous editions of the Renault Duster. The high-end RXZ model will have additional features such as fuel-saving start-stop,cabin pre-cooling, climate control, hill start, and a large touch screen. The newmodel also gets a brand new set of 17 inch to allow wheels.

The new engine will also have a CVT automatic gearbox and a six-speed manual gearbox. The lower trims with the manual gearbox variant will have the Duster’s 106hp BS6 1.5litre petrol engine. In terms of design, the new Renault Duster Turbo Petrol remains mostly unchanged from its predecessors. But the
slight change includes a lesser cladding at the rear, much thicker roof rails, and the Duster logo and lettering at the rear was red.

The LED taillights, bumpers,and the projector headlights with DRls remain unchanged from the previous versions. A new 7-inch touch screen with Apple CarPlay, Android Auto, the car
is entirely high tech. The cooling illuminated glovebox still exists. Airbags for the drive and passenger, ABS with EBD, parking sensors in the rear, the seat belt reminder and speed control reminder is all part of the standard edition – optional reverse parking camera and start to assist can be added as per the
customer’s wish.

With most of the engine parts being imported now, the price of the Duster 1.3 turbo petrol will probably be higher than the 1.5L petrol version. Though the exact price is unknown for now, the new Renault Duster Turbo Petrol is set to be a value for money mid-range SUV compared to its rivals.