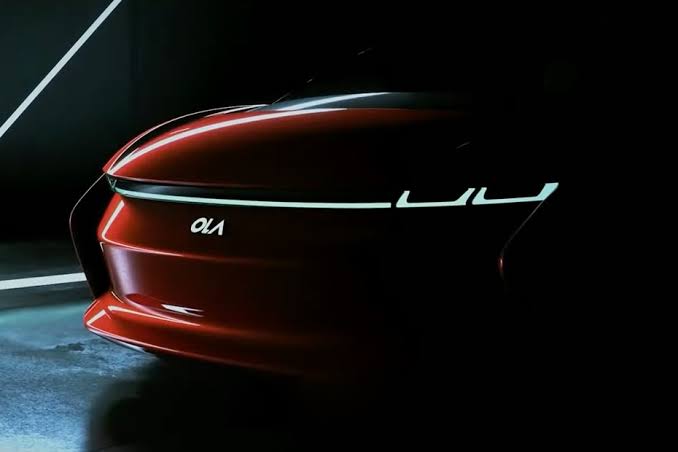 Ola has released a new teaser for its upcoming electric car on the occasion of Diwali. While the previous teasers showed the different possibilities of exterior designs, the new teaser showed a glimpse of the interior design. It will be a while before the company releases the full set of features and details about the car. But for now, let’s see what we can make of the new car from the new teaser.

The new EV’s exterior look has not be confirmed yet. This is evident from the teaser which only partly shows the design. But from what we can see, it appears to have a minimalistic design. Ola is said to apply a minimalist design to even its electric scooters, hence, we can expect the same to be true for their cars.

The teaser shows a unique design in the front of the vehicle. The nose features an LED light bar extending between the two head lamps. The Ola logo sits comfortably in the middle of the LED bar. The headlamps appear to have a new signature look. They appear more like a couple of light bars horizontally stacked one above the other. The bonnet looks sculpted, and the windscreen is upright, hinting it might be a crossover. On the sides we can notice cameras instead of rear-view mirrors.

It is unclear whether there will be multiple body-styles being developed by the company. But given its offerings in electric bikes, we can sure expect Ola to come up with different styles, and looks options in their EVs.

The new teaser shows the unique interior of the new car in a better way. The first thing we can notice is the new steering wheel design, which is squared out with a two spoke design. It is more of an octagonal shape than a square and the Ola logo is placed in its middle. On the spokes, there appear to be backlit touch controls on both sides and a pair of toggle switches.

Also, no other control buttons and features are visible in the teaser. This suggests that the interior of the EV could get a minimalist design with all the controls integrated into the touchscreen itself.

Ola has not yet announced what will power this new beast of theirs. But they have made sure to target premium audiences for their new electric car. This would mean the price of the EV will be upwards from ₹25 lakhs. They could also use a 70-80kWh battery with a range of over 500km, to make the EV more pliable to their customers.

Why is Ola Launching Electric Cars in 2024?

Ola will officially launch the vehicle in 2024 but the final details and features of the new car will be available in the coming months. We can sure expect Ola to pack a punch in their new EV. This is because it will be competing against established players like Tata, Hyundai, Mahindra, & MG, with their toys like Nexon EV Max, Kona Electric, XUV400, and ZS EV, respectively.

Ola will not make the same mistake that it did with the two wheelers. While Ola S1s are still making good sales, the company had hurried up the whole process and this created a huge furore and problem for the company. There were incident of public outrage as the delivery was delayed repeatedly. More importantly, even the delivered scooters faced many glitches and finding support for the same was next to impossible for many riders. Finally, Ola has grasped the grip of it and has been doing well in the market ever since. So, even if it is a whole year away, the 2024 launch of the electric cars seems to be the ideal scenario for the electric mobility company.

So, what do you think? Will you buy the Ola electric car or will you wait for a few more years to know about the performance of the cars in the real road conditions?