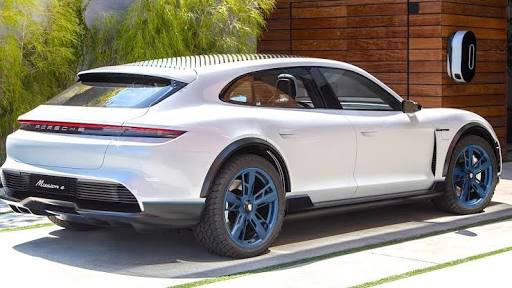 Recently the Porsche has announced in a press conference which was conducted on Friday that it’s going to launch the all-new Porsche Taycan Cross Turismo EV soon at the end of this year 2020. The concept of the car was already shown in the Gewan motor show, which was conducted back in 2018. The company has confirmed that it is going to be added in its range of electric vehicles, making its line-up more powerful.

Porsche Taycan Cross Turismo EV is very much likely to follow the E concept mission of 4 doors, tough bodywork cladding of the exterior, and four seat estate with more significant ride height. The car offers larger tyres and a four-wheel-drive system. It also shares some of its elements with an SUV of the company which is Porsche Macan. They both share a similar rear hatch and roofline profile. It also comes with the same nose, which includes headlamps and running day time lights.

The new Porsche Taycan Cross Turismo EV comes with an electric battery of 87.3kWh, which is quite impressive for such kind of vehicle. The company has claimed that it can easily provide a range of 385km. The car is capable enough to reach 124mph in 12 seconds and 62 mph in just 3.5 seconds and the top speed of 150mph, which is pretty awesome. The company has claimed that the car can travel around 310 miles in between the charges.

Talking about the appearance of the car, it looks incredible from the outside and can quickly grab the attention of many people on the roads. When the concept of the Porsche Taycan Cross Turismo EV was shown in the Gewan Motor show, it caught the attention of plenty of people with its design of both exterior and interior. Let’s wait for the car to come down on the roads and see what impact it creates in Auto Mobile’s industry.