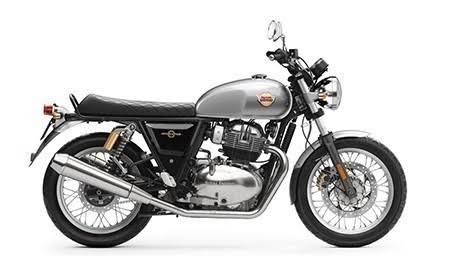 Effective in August 2020, Royal Enfield will make its big debut in the American Flat Track (AFT). The 650 FT Concept motorcycle will be seen on August 28 and 29 in competition with the Production Twins class.

The FT Design is built in partnership with Harris Performance, held by Eicher Motors, the parent organization of Royal Enfield. The vehicle is built on the Interceptor 650 and provides improvements to boost its flat track quality and capabilities. The FT Concept uses the usual flat track structure and a specially designed brazed steel tubing frame with a controllable head angle, which can be modified for specific drivers. It is fitted with 19 inches wider tires, CNC machined RDS traction rims for the grip. Dunlop’s flat pads and S&S silencer are included on the motorcycle.

Also, the 41 mm forks were connected to the Ohlin’s internal. The rear uses a twin-pot calliper as there is no front brake. Johnny Lewis, an AFT driver and an AFT Royal Enfield Slide School Coach will drive the bike. Lewis will also be riding the Dixie Speedway on 15 and 16 October with the four female leaders of the ‘Build Train Race’ program.

Besides, fans will get a chance to ride Royal Enfield motorcycles during the AFT session. The entire collection of Royal Enfield bikes will be made available to customers with a valid driving license during the duration of the AFT season. Therefore, at some sessions, Lewis will host a Royal Enfield Slide Class. In the lessons, participants will be coached by Lewis and will learn the fundamentals of the FT411 Himalayan flat track.

Lewis said that the Royal Enfield FT Design has been successful to date. Amazing motorcycle performance has been evident already. The Harris Performance and Royal Enfield team did excellent work with the framework and have already done a lot of work on his suggestions with minor improvements.