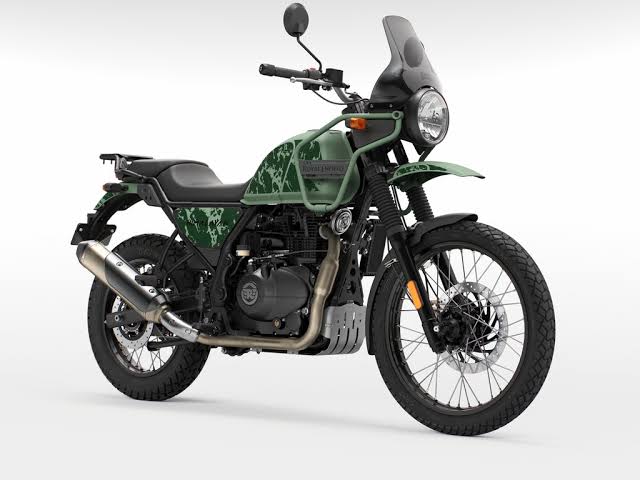 Royal Enfield recently tested its new upcoming adventure tourer, the Himalayan 450 and it was caught by some of RE’s die-hard fans on the roads. The new bike is going to be a lot different than the Himalayan and the new RE Scram 411. Larger and more powerful than the original Himalayan, the new version could be expected with lots more upgraded features. Let’s have a peek into what we can expect from the new Himalayan 450.

The most notable feature of the Himalayan 450 is the flat, fin-less engine, which, after years of RE’s bladed engines, is a new upgrade. The new engine design seems sleek and compact, even though it comes with a lot of punch. This is evident from the fact that the engine design is liquid cooled and quite different from RE’s previous attempts with oil cooled engines.

What requires such a cooling system could be a 4-valve cylinder head, in contrast to the current model’s 2-valve cylinders. The 4-valve system has already been implemented in RE’s 650cc models. So, it is very easy for them to go with the same for the Himalayan 450. This means we can expect a powerful engine on the new bike.

Other Important Features of Himalayan 450

With the fuel prices going high every day, we need to face the fact that the Himalayan 450 with its powerful engine will require a lot of fuel. That is why RE has increased the size of the fuel tank, which rises a lot higher from the rider seat. Additionally the larger fuel tank provides support and comfort to the rider. The protruding petrol tank gives a cushioning effect when you sit on the seat.

The body work of the Himalayan 450 also seems different, indicating Royal Enfield has come up with an entirely new look for the new bike. What is similar to the original model though is the round headlamp, but with a heat sink on its back. With LED’s dominating the headlamps in almost all the new bikes and cars, the energy efficient LED’s will be prominent on our bike too.

Other note-worthy features include a longer front beak, redesigned jerry can holders, upside-down front fork, metal-braided brake hoses, wire-spoke wheels with the front one being 21-inches, and possibly a new instrument cluster. We can expect the Himalayan 450 to have the company’s unique Tripper Navigation system.

Royal Enfield usually takes a lot of time testing its new vehicles before launch, so it could be quite some time before we they launch the bike. But, as with all Royal Enfield Bikes, the Himalayan 450 will come out with a bang. We can expect the bike to be launched by the end of 2022 or early 2023.

As of now, the Himalayan costs around ₹ 2.2 Lakhs. The newer & larger model with a new engine could cost well above ₹ 2.5 Lakhs in India. The on-road price could almost be ₹ 2.75 Lakhs. In spite of the price, the model will bring much needed improvements in the features. The best boost will be in the power segment, where the new engine will give additional horse power to the rides. So, the off-road trips will get that much easier.

While, the Royal Enfield engines are not known for their racy speeds, we can expect the company to have maintained the balance between the power and speed in this new bladeless engine.

So, what do you think? Will the new Himalayan 450 attract many new riders or will it cater to the same segment of riders?