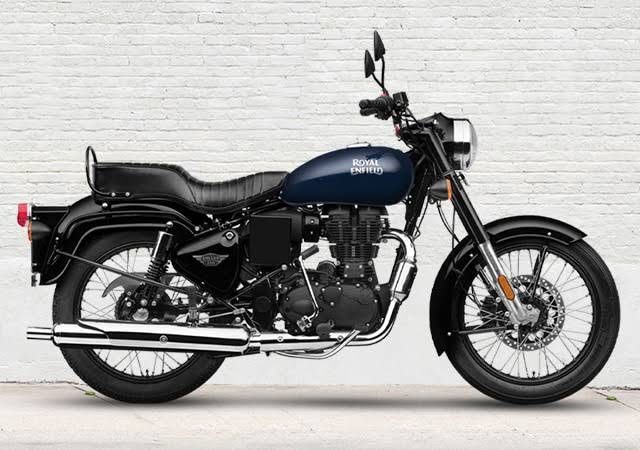 Royal Enfield is busy testing its two new bikes, the Himalayan 450 and Super Meteor 650, on the roads. Although this has been going on for a while now, this time the test mules have shown to be including accessories with them. These accessories set them apart and give a new meaning to these vehicles too. Let’s have a closer look at the two new bikes and assess what we can expect from the models, in the coming days.

The new spy shots of the test vehicle however, show a different set of details that catch our eyes. The test vehicle sported an aluminium top box and panniers, which says that there is more room for luggage in the new bike. There are also other likely possibilities like a tripper navigation pod, touring seats and mirrors, and even cosmetic enhancements that upgrades its looks.

The Himalayan 450 is expected to launch in India by March 2023 with the expected price range of ₹ 2.6 to ₹ 2.7 lakhs. Powered by a 450cc liquid-cooled engine which can produce up to 40bhp, this bike is an upgrade to its older version, the Himalayan 411, which has a 410cc oil-cooled engine.

On the front, we can notice a heat sink on the back of the headlight. This confirms that the headlamps could be LEDs. The round instrument cluster is mounted high up in the cockpit, making its visibility much better. One other improvement is the inclusion of steel-braided brake lines, unlike the rubber brake hoses on the current Himalayan model.

As for the wheels, the Himalayan 450 will get the same as that of its brother, a 21-inch front and 17-inch rear wheels setup.

We can expect more details about the Himalayan 450 in the coming days, as Royal Enfield is planning a huge show next year, with its upgraded fleet.

As the name suggests, the Super Meteor is powered by a 648cc, parallel twin-cylinder engine with fuel injection tech. This is the same engine that powers the RE Interceptor 650 and Continental GT 650. The engine delivers a claimed power of 47PS and 52Nm of torque, quite powerful as many would say. The engine will be paired to a 6-speed gearbox with slipper and assist clutch.

As for its suspension setup, the Super Meteor could come with USD front forks and twin shock absorbers in the rear. The front and rear disc brakes along with the standard dual-channel anti-lock braking system could also be included in the bike.

The retro-styled round headlamps that adorn the front will hold the non-adjustable, large windshield above it. The test vehicle also showed alloy wheels, chromed crash guards, a chrome bezel, road-biased tyres, forward foot pegs for better foot placements, a low slung, a fatter rear fender, a round tail lamp, similar turn indicators, a tear-drop shaped fuel tank, split-style seats, and twin-sided exhaust canisters. It is reported that several touring-friendly accessories can be expected with the bike too.

Similar to the RE Meteor 350, the Super Meteor will have a semi digital instrument cluster to show the readings. The bike will also get a flat footrest for the pillion, a hard case pannier placed on the left side, an engine guard with auxiliary lights, and a top box on its tail rack. All these add up to making the bike, a top-of-the-line cruiser/adventurer from Royal Enfield.

The Super Meteor 650 is expected to be launched in India by November 2022. It could come with a price tag within ₹3 to ₹ 3.5 lakhs.

Both the Himalayan 450 & the Super Meteor 650 are more powerful than the majority of the vehicles in the line-up. When it comes to Himalayan 450, it is only a small upgrade from the previous 410 cc engine. On the power or on the usability, there is not much to experience. There is no rational to upgrade (?) to the Himalayan 450 from Himalayan 411. However, in case of the Super Meteor 650, there is giant leap that takes this machine to a whole new level. It is a league apart from the 350 cc variant. It is a sturdy & safe cruiser that competes with some of the super powered bikes in the country.

So, what do you think? Will the tourer win hearts in spite of giving only a minor upgrade or will it be the cruiser’s win? Regardless of which bike outperforms, the company can rejoice in better sales. Whatever happens, customers will only choose the right thing for them.