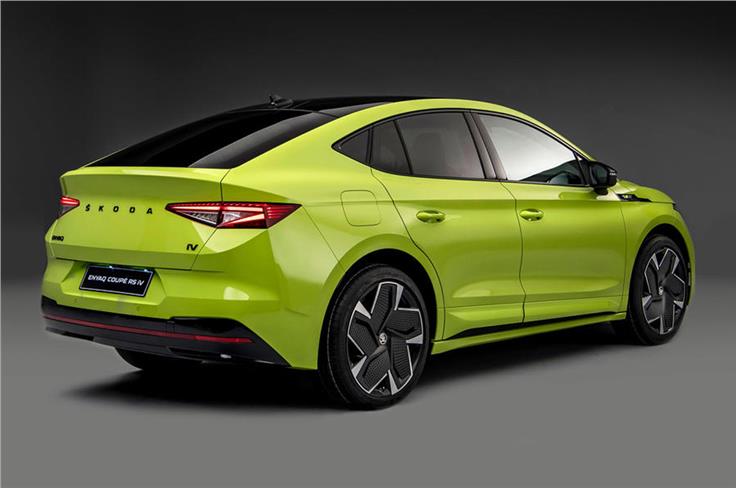 With all the buzz about Electric Vehicles (EVs), almost all automakers are coming up with their own take. The recent addition to your list of choices for EVs is Skoda Enyaq Coupe iV, an all-electric SUV, the first of its kind from the Czech manufacturer.

The new EV is touted to have a range of about 545kms. It is expected to come with three power train options as available in the global market. Let’s get into the details to know more about this family size e-SUV. Skoda, a part of the Volkswagen group is fast becoming an important brand in the country. Skoda Octavia and Superb used to be one of the best cars on the Indian roads. Today, the Czech car maker has cemented its position in the country with the launch of Skoda Kushaq last year.

The Enyaq is based on the Modular Electrification Toolkit (MEB) developed by Volkswagen. The battery size options available are, a 58kWh battery pack, and a 77kWh battery pack. The 58kWh battery power train has a range of 390kms while the 77kWh larger battery can reach upto 545 kms. It can go from 0-100kmph in just 6.2 seconds. The batteries are enabled with fast charging going from 10 percent to 80 percent in 29 minutes. The entry-level model gets a single rear motor producing 201hp while an all-wheel drive vehicle with a 262hp will also be available soon. The maximum range of the AWD is not yet available.

The captain seats on the inside are luxurious and comfortable for people of all sizes. The rear seats come in a 60:40 split and these can be folded to increase the boot space of the car.

Skoda Enyaq Coupe iV has a unique exterior that can be easily identified. The EV is 6mm taller and 4mm longer than its internal combustion engine counterpart. It also comes with two colour options, Phoenix Orange and Graphite Grey. Some of its more attractive features include, butterfly grille with illumination, sharp LED headlamps, and L-shaped LED tail lamps.

The Enyaq has a drag coefficient of 0.234 which is better than the normal Enyaq SUV. This makes the electrical vehicle more efficient. The slanting and smooth rear gives the car a unique profile. In fact, the sloping rear plays an important role in the very low drag coefficient. The Enyaq comes with up to nine airbags, a 360-degree camera, adaptive cruise control, and blind spot detection, making it very well equipped in terms of safety.

The Enyaq is expected to be priced around ₹60 lakhs, making it compete with Volvo XC40 Recharge. We can expect the Enyaq in our roads by the mid of 2022 as the Automaker is gearing up to give its grand entrance into India. While the company has not yet made a decision to sell the Skoda Enyaq in India, it could happen sooner than later.

The Future Models of Skoda in 2022

Now with the launch of Enyaq Coupe iV, Skoda is reaching to newer areas. Skoda Enyaq Coupe vRS will be the first performance oriented EV of the brand. The vRS uses a twin motor configuration that provides a total power output of almost 300 hp. The motors provide a high torque of 460Nm and reaches a speed of 100 kmph within 6.5 second.

Skoda will also launch the luxury sedan Slavia in this year. Slavia is the successor of the Skoda Superb and it will be launched in early March. Another important update from the Czech carmaker is that the recent launch of the Kodiaq facelift had already sold out for the year 2022.

Skoda had planned to sell as many as 1200 facelifted Kodiaq in India and within a short period, now the company has sold out all its stock for the year. One important thing to note here is that the company is not manufacturing the Kodiaq in India but rather as a complete knockdown kits. It is only assembled in the Aurangabad plant of the company. The company has said that the next batch of Kodiaq will undergo a price hike. Skoda Kodiaq is a mid-sized SUV that competes with fellow Volkswagen Tiguan, MG Gloster, Toyota Fortuner and the Citroen C5 Aircross.

Tata has recently launched the electric versions of its top selling models like Altroz & Tigor and the models are being sold in higher numbers. Learning a thing or two from the Tata, Skoda is also looking to launch its own electric sedan and electric hatchback. It can be expected to be on the lower end of the price range. Although it is too early to know anything about the models now, it can be safely assumed that the company will also focus on the entry level segment of the market.

As far as the year 2022 is concerned, Skoda has plans to launch as many as 6 cars this year.