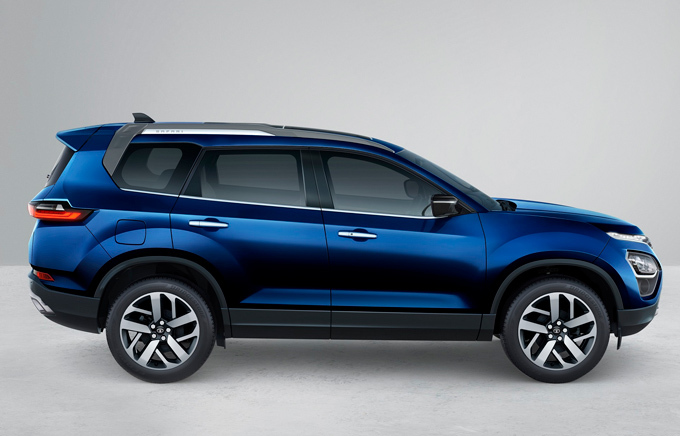 The all-new Tata Safari 2021 SUV official images have been released at last. Tata has also launched its flagship SUV line from the Pune-based plant. Selected dealerships have already started accepting the unofficial bookings of the model. The official unveiling will be done on 26th January, and then the launch will happen after few months.

The Tata Safari Imaginator suite has also been launched. It offers multiple interactive features with the help of Augmented Reality. The customers can explore the SUV virtually while sitting in their living room.

The model has a design language of Tata Impact 2.0. It will be offering an impeccable combination of robust lineage, grand quality, outstanding finishing, and the 4PS. If you are wondering what 4Ps are, this is for you: power, presence, prestige, and performance. The SUV is premium in appearance with large headlamps, signature grille, LED DRLs, stepped roof with roof rails, LED taillamps, and so on.

We still do not have the official details of the feature of the Tata Safari. However, it is clear from the spy images that there will be a premium JBL audio system for the car. The upholstery, too, will be quite opulent with a Benecke Kaliko oak brown leather seat. There will be a 7-inch instrument panel, an adjustable seat for the driver, and a cruise control system. Also, the car will come equipped with a large infotainment system along with smartphone connectivity. There will also be several other attractive features such as rear disc brakes, IRA connected technology, and electric parking brake.

The all-new Tata Safari 2021 will come equipped with the Harrier‘s 2.0 litre FCA sourced diesel engine. The engine will churn out power worth 170bhp and 350 Nm of torque. There will be both automatic and manual gearboxes options. Only FWD or front-wheel drive system will be provided. Afterward, the model may receive a 4×4 drivetrain system as well.

The CEO and MD of Tata Motors, Mr. Guenter Butschek, while revealing the first glimpse of the new Tata Safari, said that the model would serve as the flagship offering to the Indian consumers who have many aspirations. The new avatar of Tata Safari will take further the legacy of the SUV lifestyle in India.

This model is suitable for families and friends with multifaceted lifestyles, who work together, drive together and ride together. The car is capable of offering unparalleled performance. The company aims to rule the roads with this all-new Safari.