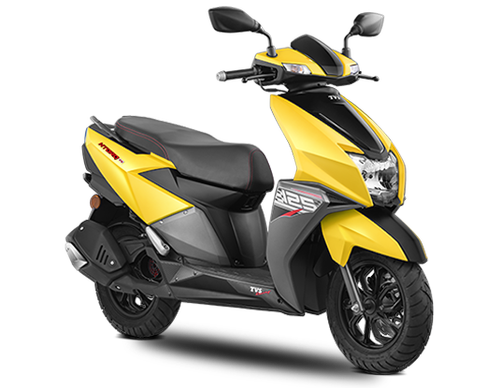 The new TVS Ntorq Race Edition in a brand new yellow and black colour scheme was announced by the TVS Motor Company. Prior to the launch, details on the new model have been leaked.

As per the details, TVS Ntorq Yellow Race Edition has had no changes to its engine from its previous edition. It has the same 124cc, single-cylinder engine with an air-cooled engine boost with fuel injection technology. The motor has a 9.12bhp power at a 7000rpm and a torque of 10.5Nm at 5500 rpms. The features remain unchanged. The scooter does come up
with a SmartXonnect smartphone connectivity feature that is very useful.

It also features a red hazard switch, an engine kill switch, and an external fuel filler cap. Another significant feature is the LED headlamp and the daylight running LED lights. In terms of design, the scooter has many cosmetic and design upgrades. It features more sporty and aggressive features with a chequered flag design on the various elements of the scooter. The majority of the scooter has a grey-ish black colour with tints of yellow, which gives the scooter a sporty look, which signifies TVS’s racing pedigree. The scooter also has the same throaty exhaust note, which is a very pleasing feature.

The TVS Ntorq Yellow Race Edition will appeal more to the younger generation in the
current market.

The launch of the TVS Ntorq Yellow Race Edition is expected to happen soon. The previous
Ntorq 125 Drum and Disc variants were priced at 67885 and 71885, respectively, and these
are ex-showroom prices for Delhi. The price of the new 125cc TVS Ntorq Yellow Race Edition
is yet to be revealed but is estimated to be around Rs.74365 (ex-showroom Delhi). The
leaked images revealed that the scooter could be booked at dealerships across the country.
It is expected to arrive at dealerships later this month.