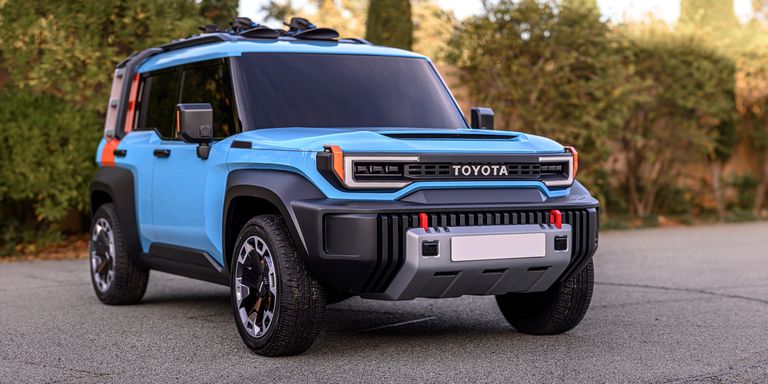 Toyota’s new retro style EV has won the 2022 Car Design Award for concept vehicles in Milan, Italy. This has come as a sweet shock for many as the E-SUV competed against some heavy hitters like the Audi Skysphere, Porsche Mission R, Volvo Concept Recharge, Polestar O2, Lexus Electrified Sport, IED Alpine A4810, and many others.

Although the EV has not yet reached the production line, its design is standing out from the crowd and it is quite noteworthy. In fact the Japanese company has not even said about the powertrain of the concept SUV. Let’s look into the finer details of the EV and hope to see it on the showrooms by atleast next year.

The new Compact Cruiser takes inspiration from Toyota’s first-generation Land Cruiser models. Those designs were legendary and Toyota has clearly found the best way to bring their design back online.

In the front, the EV showcases a grille with the Toyota lettering in the centre, which is flanked by horizontally arranged LED headlights. This aspect could have been borrowed from the J80 Land Cruiser model, which features a similar design in its front. Below the grille is a bulky front bumper with a large silver skid plate, while the bonnet features a wide air scoop, although, why an EV needs an air scoop is a question we all ask.

On the sides, the wheel arches have been squared off, making sure that the EV is meant for off-road driving. A blacked-out A-pillar gives the impression that the windows and the wind screen are connected. The C-pillar at the back is of a contrasting colour and above that is a side-mounted ladder leading to a bespoke roof rack. The retro styled white wall tyres give it a very dashing look on the sides.

On the rear, the EV features a set of square LED tail-lights, with Toyota lettering on the tailgate. The roof rack also extends into the rear upto the tailgate itself. The rear bumper is also bulky like the front and it features a prominent silver skid plate.

Overall, the EV looks like a rugged all-terrain vehicle with classic looks that can be seen in the science fiction movies of 1980s & 1990s. In fact, the Compact Cruiser EV is one such vehicle that has the unique ability to blend the age old retro look with the future-ready electric powertrain.

The concept EV has not yet gained its own powertrain yet, but we can guess that it will be an All-Wheel-Drive with a dual motor set-up. Sticking to the present trajectory of things, Toyota could use its TNGA platform to make the new SUV with the required modifications for EVs. We can expect a lot more details about the powertrain after Toyota confirms the launch of the EV.

When launched the new Compact Cruiser EV will face rivalry from EVs like the Ford Bronco Sport and the next-gen Jeep Renegade in the international markets.

With Toyota gearing up for launches like Urban Cruiser HyRyder, & next-gen Innova, we can expect the company to focus on the new EV after the above models hit the roads. However long it may take to see the SUV, we can sure hope it will be worth the wait.

It is very early to speculate on any of these things. However, we can be sure that Toyota will look to launch the model in India. As of now the line-up of Toyota looks bleak and with such new models entering India, it could energise the dwindling sales of the company.

Toyota will soon launch its own Hyundai Creta Competitor named as Toyota Urban Cruiser HyRyder, which will compete with Nexon, MG Astor, Volkswagen Taigun & Skoda Kushaq. At the same time, the company is yet to get a reliable electric model in the country. Looking at the initial way the things are moving, Compact Cruiser could well go on to fill the void.

Although there is much requirement for development and production of the concept design, the Japanese company would not waste too much time in deciding things. Ultimately Toyota could launch the model as early as July 2023. It could be priced around ₹18-25 Lakhs that could compete with most affordable electric SUVs in the country.

The retro styling, the futuristic electric powertrain, the SUV power and the comfort of a luxury car makes the Compact Cruiser EV an appealing package that will be sold like hot cakes.

Will you buy this EV once it comes to the market or will you look for other options? Let us know your views in the comments.