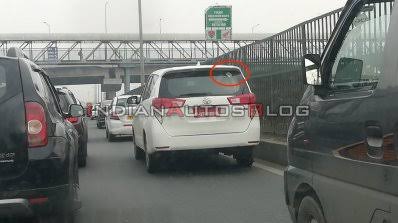 Toyota Motors has been reportedly working on a CNG variant of its Innova Crysta.

Toyota Innova Crysta CNG is going to be launched in India very soon in this year, and it will be BS-VI compliant right from launch. Petrol and diesel version of the car was already released on 6 Jan 2020. Recently we have seen a look of the CNG version on the roads of Gurugram. It was caught on the camera while it was out for a test drive. We also got see the CNG sticker on the back of the car.

Toyota Innova Crysta is the most popular MPV in the whole and also arguably the best in the business as well. There will be a decline in the price of the Toyota Innova Crysta CNG to make it more affordable for the people. Because of the negative affect of sales in high prices of BS6, Toyota’s petrol CNG version would most likely be Toyota’s move to make the CNG variant of innova Crysta more approachable.

There will be a bunch of updates in Toyota Innova Crysta CNG which includes stability control, hill assist and emergency brake signal. The CNG version looks identical to the regular Innova Crysta, and the badging shows that it has a 2.7-litre, petrol engine under the bonnet. The BS6 compliant 2.7-litre petrol engine produces 164 BHP @ 5,200 pm and 245 Nm @ 4,000 rpm.

Now let’s wait till the Toyota launches this variant of CNG officially. Let’s see what impact it creates in the industry of Automobile.