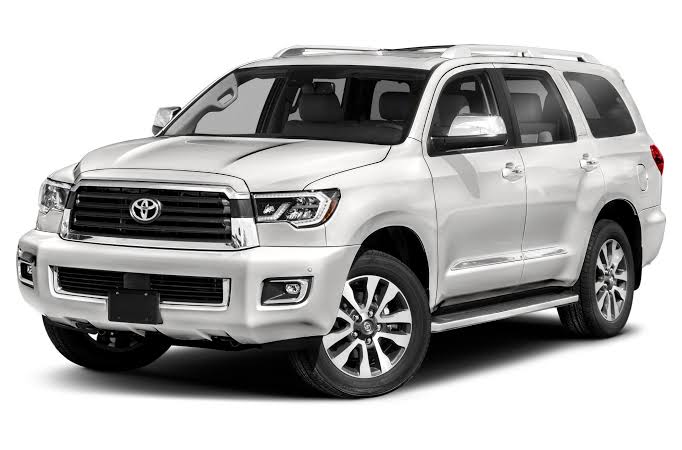 Toyota Sequoia has got a new lease of life after almost 15 years in a limbo. The new and third generation of the car was unveiled by the Japanese automobile giant on 25th January. Toyota Sequoia is a large SUV that is primarily for the markets of United States and Middle-East, where the average car owner prefers larger and heavier cars.

Toyota has unveiled the car now but the sales of the car will start from the year 2023. The new Toyota Sequoia shares many features and similarities with the large Tundra pickup truck from the company. In fact, it uses the same Toyota New Global Architecture, GA-F, full sized underpinning. This platform can support a wheelbase of even 4180mm. In fact, Toyota Sequoia is now the largest SUV by the company. It is the spiritual successor to the Toyota Land Cruiser.

Sequoia is named after the Giant Sequoia trees that grow to an average height of 250 feet. Just like the magnificent trees, the Toyota Sequoia is also large and powerful vehicle. The dimensions of the new 2022 facelift is not very much different from the previous design. At 5210 mm length, Sequoia maintains the same dimensions. The width of the SUV at 2029mm is even longer than the wheelbases of some compact hatchbacks. The height of the SUV is 1956mm. So, an average Indian will have no trouble in climbing in to the car. There is no need to duck while entering the SUV.

The full sized SUV is also a heavy one. It weighs almost 2.7 tonnes and can tow vehicles or load up to 4 tonnes. With a lavish ground clearance of 254mm, you need not be worried about the bumpy roads or off-road conditions. If you are going to off-road trips, then the muscular mean machine is definitely the one to have by your side. However, one down side is the turning radius of the vehicle is a massive 38 feet.

The full sized SUV is powered by 3.4 Litre six cylinder turbo petrol V6 engine. The gas guzzler is supplemented by an electric powertrain that altogether provides a power of 437 hp. The 1.87 kWh battery powers the electric motor. The hybrid drivetrain not only makes the SUV powerful but also helps it easily manageable within the crowded city limits. The SUV uses a 10 speed automatic gearbox.

Exterior and Interior of Toyota Sequoia 2022

Toyota Sequoia gets a new grille on the front that provides a distinctive look to the SUV. While the general dimensions are almost the same, there are other stark differences such as the wheel arches, rear glasses and the rear lights. Toyota Sequoia is available in three colour options as of now. A dark black, grey and ivory colour. The interiors and upholstery comes only in the dark black.

On the inside it looks much like the Toyota Tundra but with an additional third row. Incidentally, one important feature that you can see in the new 2023 Toyota Sequoia is that the second row seats are not movable but the third row seats are. This option helps if you need to fit larger cargo at the rear of the SUV.

The full sized SUV has a 10 direction electrically adjustable driver seat. Passenger seats come with a 6 way adjustable seats. All seats come with heating option that helps in the cold climates. The captain seats in the second row are as comfortable as the ones on the front row. Even the third row gets a lavish leg room.

The SUV comes with 12 speaker infotainment system that keeps you entertained. You also get optional premium JBL audio systems. The infotainment system gets an 8 inch touchscreen or 14 inch touch screen depending on the variant. Cup holders in all three rows, rear view camera, air filter, three zone climate control, etc., gives a thorough premium feel to the car.

With a car of this size, you need to have the state of the art safety features to keep your family protected and Toyota Sequoia provides just that. It has automatic blind spot and lane departure warning and other accident avoidance systems. It comes with front and side mounted airbags that gives utmost safety to the passengers.

It also comes with compass, navigation system. There is a large moon roof that provides a good view of the environment.

As of now, Toyota has no plans to launch the model in India. However, much can change in the one year that is required to manufacture the car. With the Toyota Land Cruiser on the verge of the life end in India, Toyota will look to bring in the new mean machine from the line up in 2023.

When the car comes to the market in 2023, it could cost around 40 Lakhs to 50 Lakhs depending on the variants.

Other 2022 Toyota Launches in India

Toyota is ambitiously launching many models in 2022. Apart from the Toyota Avanza and Toyota Veloz, the company is also launching the pickup truck Hilux to compete with Isuzu D Max.

Apart from that the company is also developing a competitor for the market leader compact SUV Hyundai Creta. It is being jointly developed by the Maruti Suzuki and Toyota. The Toyota Creta Rival will also be launched in 2023. It is to be noted that Tata is also launching a Creta Rival codenamed as Black Bird in 2023. In all the 2023 is going to see the launch of many SUVs in the market.

So, what do you think about the Toyota Sequoia? Will it replace the Land Cruiser in India or will the market shift towards other full sized SUVs like MG Gloster?