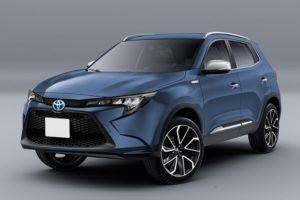 It was reported earlier that the Toyota has been working on a new compact SUV. It will be based on the Yarif. Recently the car was spied on the roads during testing. We got to witness that the appearance of the car is sportier as compared to the Yarif Hatchback. The appearance and dimensions of the all-new Toyota Compact SUV are slightly distinctive as compared to other Compact SUVs in the Market.

It will come up with the high ground clearance, front and rear bumpers, SUV-ish stance, and taller wheels. It is expected that the all-new Toyota Compact SUV has a lot more to offer. The new taillamps and newly designed wheels make it look different from the Yarif Hatchback. The compact SUV will be 40mm taller as compared to its younger sibling. It is also going to provide a higher seating position as compared to its younger sibling.

Talking about the interior of the all-new Toyota Compact SUV, it will offer more cabin space and a lot of features. However, features vary on the model of the vehicle. The features of the car include 10inch head-up display touchscreen infotainment system and so much more. Once it launches, it is going to lock horn against Tata Harrier, Hyundai Creta, Nissan Kicks, Kia Seltos, and MG hector. It is also expected to rival the upcoming Mahindra XUV 400 and Tata Blackbird. It seems that Toyota is all set to conquer its competition with its new launch.