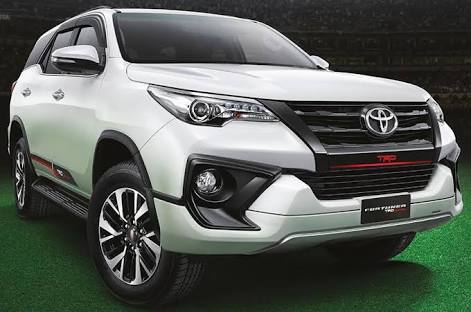 Toyota can’t wait to launch its new model of the existing flagship SUV collection, the Fortuner TRD Sportivo in India.

The car will be known as Toyota Fortuner TRD Sportivo in the market. Toyota has made the announcement for the car being launched in the market on 12th September 2019.

Before it’s official launch, the car was showcased to all the dealers in Bengaluru to give them detailed insights about the new model.

Toyota’s new car will add to the new variant in its Fortuner family. The car has been specifically designed by the in-house development department which is called TRD (Toyota Racing Development).

The company has made sure to keep this new model at the top of the line as a premium variant in the company portfolio.

The entire design structure of the car has been made in a way which gives the car a very sporty look.

The Toyota’s new model will experience revised bumpers at the front as well as at the back, a stylish new front grille, faux skid plates at both the ends of the cars.

Toyota will give the car a dual paint finish and a set of alloy wheels of 18 inch which will overall add to the rugged look of the SUV.

However, the price depends on the state and the type of model.

Hyundai is all set to launch its all-new Fortune TRD Sportivo model on 12th September.

The company is super excited to bring in the new generation avatar and has planned to make the car a prominent model in the premium list.

Toyota’s new Fortuner model will be seen having the same engine as that of the standard SUV variant.

The model will have a 2.8-litre four-cylinder Diesel engine which has the capacity of producing 174bhp and 450Nm of torque.

However, the model which will be launched in India will miss out on the manual gearbox and 4X4 options.