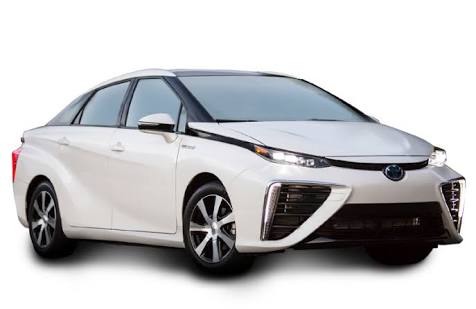 Toyota Mirai is a 4-door sedan which delivers to claims a range of 502kms under the U.S EPA (Environmental Protection Agency), which makes the car one of the most fuel-efficient HFCV.

Mirai was first ever launched in Japan, which was then followed by U.S, UK and other European markets. As per the recent news, one of its units has lately arrived in India.

Toyota’s Mirai comes with a very sophisticated design which is loaded with very high-tech features. The features include:

1. 4.2-inch HD TFT liquid crystal display which is meant for the speedometer and the multi-information display.

2. A touchscreen which is floating in nature used for the infotainment system.

5. A centre console raked in nature, which consists of silver trim

Toyota Mirai’s price is estimated to be costing between Rs 6 Lakhs to 9 Lakhs. (introductory, ex-showroom India).

The Toyota Mirai is known to use the Toyota fuel cell system (TFCS) which consists of cell fuels and hybrid technology. It comes along with the company’s FC stack and very high-pressure hydrogen tank.

The fuel system of cell delivers some very high power to an electric motor which pushes the peak of the power of 149bhp with a 335Nm of torque.