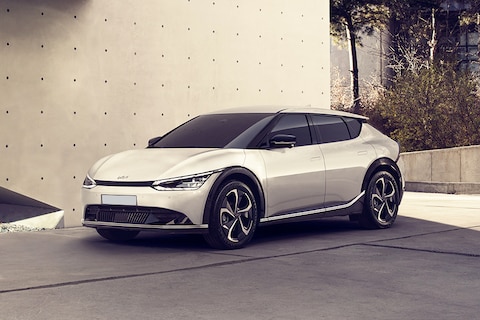 2022, the New Year has been busy so far for all major automakers. After a slowdown of two years due to the global pandemic, the semiconductor chip shortage, etc., the global automobile industry is slowly bouncing back to normalcy. Although most of the international automobile giants are gearing with their new models to be launched during the festive season, there are still a lot of new cars and SUVs coming up each month. And sure enough, June 2022 is going to see some fresh new cars and a few revamped ones too. Let’s look at some of them and hopefully you’ll get an idea as to what to buy for yourself.

The Kia motors is all set to unveil its India specific EV in June, with the price announcement scheduled for the 2nd of the month. The new EV will be available in limited numbers and it is made using Hyundai’s E-GMP architecture. It is expected to come with a 77.4kWh battery pack, in a rear-wheel-drive. The motor options, however, will be up for choice. It can be equipped with a single-motor layout that produces 229hp and 350Nm torque, or an all-wheel-drive, dual-motor layout that produces 325hp and 605Nm torque.

The images of Kia EV6 has already flooded the internet and it looks stunning at the outset. The Korean company has indeed turned many heads and with this launch, it enters the electric segment too.

The well performing Hyundai Venue is going through some major upgrades and we posted an article about that same earlier. As expected, the new Hyundai Venue facelift will come with significant upgrades on the exterior and the interior. It will come out with an all-new front end design and a major makeover on the interior like, a larger touchscreen infotainment system, climate control and so on. The facelifted Venue is expected to be powered by the same 120hp, 1.0-litre turbo-petrol; 115hp, 1.2-litre petrol; and 115hp, 1.5-litre diesel engines. The price announcement is expected to be around the mid of the month.

With the facelift, Hyundai will see to cement its position in the sub 4 metre micro SUV category. With Tata Punch grabbing much of the public attention, this facelift was due for the company.

The replacement for Volkswagen’s Vento is all set to be launched in the coming weeks. Similar to Skoda Slavia, the new Virtus aims to become a luxury sedan in the Indian roads. It will be available as two separate variant lines, a Dynamic Line which includes all the 115hp, 1.0 TSI variants, and the Performance Line, which includes the 150hp, 1.5 TSI variants. The difference in power will decide whether you would want a performance-based vehicle or an economy-based vehicle. The German company has confirmed that it will unveil the price of Virtus on the 9th of June. So, stay tuned for it.

The next gen Vitara Brezza will come with a lot of cool new features and engine upgrades. It has borrowed a lot from its sister cars like the Baleno, Ertiga and XL6. The exterior of the mid-size SUV has been redesigned to suit the modern looks and as for the interior, it has borrowed from the new Baleno. The New Vitara Brezza will be powered by a 103hp, 1.5-litre K15C Dual-Jet engine, the same ones from the Ertiga and XL6. And, as for the transmission options, you can get it with either a 5-speed manual gearbox or a brand-new 6-speed torque converter automatic gearbox. The price of the new SUV will be unveiled by the end of June.

With this launch the company will look to break into the compact SUV segment and assert its supremacy of the Indian market. However, new models from competitors will greatly disturb the dreams of the Indo-Japanese company.

The C3 Aircross is an India Specific sub-4m SUV, set to be launched by the French automaker Citroen. This is a follow up of the company’s first offering on the Indian market, the C5 Aircross. The C3 crossover is expected to be powered by a 1.2-litre turbocharged petrol engine and it will compete with the likes of Nissan Magnite, Tata Punch and other mid-size SUVs.

It has been one of the most awaited launches in 2022. There are many reasons behind the public anticipation including the throw away price at which the French automobile giant is planning to sell this crossover. Also, there had been talks about the made to order model in which the company is planning to sell the Citroen C3. All in all, the industry is going to be disrupted with this launch and we will cover it first-hand when it happens.

The new Scorpio-N is likely be powered by the 2.0-litre mStallion turbo-petrol or the 2.2-litre mHawk turbo-diesel engine, similar to what we can find in Thar and XUV700. The new Scorpio is in lines with the company’s idea of giving a facelift to the well performing Scorpio (original) model. It will feature a larger touchscreen on the dashboard and equipped with some of the latest tech on the interior. The price announcement is scheduled for 27th June.

Already the teaser videos from the company has shown a rugged and muscular stance for the model. It is to be remembered that the model Scorpio is one of the few that has a universal recognition in the country and this new model will live up to the expectation that comes with it.

Lexus is set to launch its flagship SUV as the LX500d in India. It will share the design elements from Toyota’s Land Cruiser LC300, but with a lot of revamped designs and style. Under the hood, it is powered by a 305hp, 3.3-litre twin-turbo V6 diesel engine, paired to a 10-speed automatic transmission, making it a powerful choice for an SUV. The price announcement is scheduled to be around 15th of June and we can expect the Lexus to show a huge potential in the Indian Roads.

The luxury arm of Toyota has got a good run in the country and the general expectation is that the new model will follow the suit.

Which of these new launches are you excited about? Which cars will be an overnight winner and the loser in the market? What is your take on the launches? Share your comments and your experience about these cars with us.