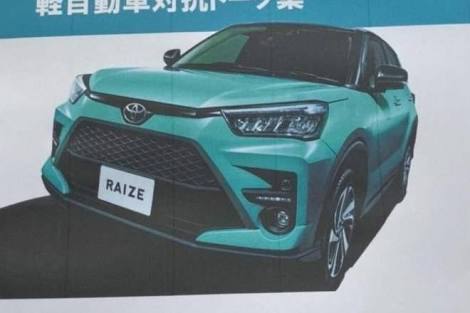 Toyota, one of the biggest automakers in the country is all set and excited to launch its upcoming Raize subcompact SUV.

The compact SUV is all set to make its presence in the global market in the coming month, November 2019.

Toyota’s all-new Raise Compact SUV will be seen giving a tough competition to other models such as Ford’s most popular model- Ford EcoSport, Hyundai’s Model Venue and various others in the market.

Here are the must things to know about Toyota Raize Compact SUV:

The design of the model comes with premium designing which comes with a typical Toyota design.

The SUV will be seen coming up with new fog lamps and daytime LED lights.

One difference which the customers will see in the model is that the logo of Toyota will be placed above the grille this time.

The model will have an 8.0-inch touchscreen which is a freestanding system which will be placed at the centre console.

The choices of transmission include a six-speed manual box and a CVT. The drive layout in the front wheel will be seen as a standard and the topmost model will be seen having a 4WD layout.

The price of Toyota’s Raize will be varying between a range of 8 Lakhs to 10 Lakhs depending on the model.

Toyota’s upcoming model ‘Raize’ is based on the flexible DNGA platform. It is mainly aimed at products which are developed for marketing which are emerging.

The platform is considered to be a low-cost version of the advanced TNGA modular architecture which is seen underpinning the: C-HR, RAV4 and Prius.

There are speculations that the model will have dimensions very similar to that of Rocky’s SUV. The dimensions of Toyotas’ Raize compact SUV is as follows:

As per speculations, the model is expected to launch anytime between April – July 2020.