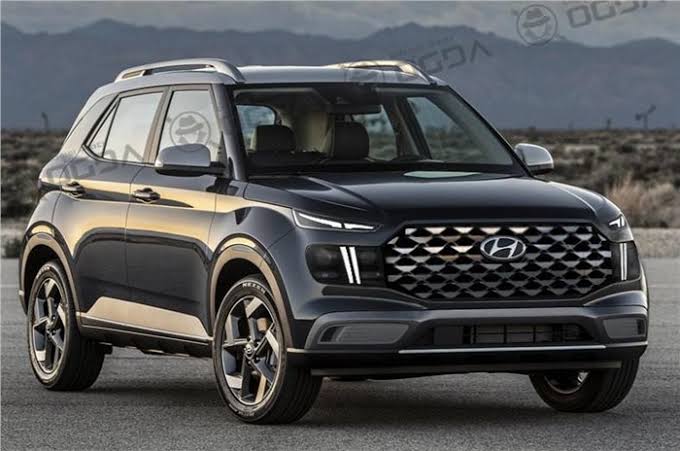 Hyundai India is all set to launch its most valuable cars for this year, the renewed and refreshed Venue. The new Venue can be expected on Indian roads as early as May, as Hyundai has confirmed its global launch to be set in India. The earlier version, as we might remember, was launched globally, from both India and the US, three years ago. Since then, the Venue has found itself a huge fan base both in India and abroad. The compact SUV is best suited for Indian roads and the style and performance were far better than its competitors like, Tata Nexon, Kia Sonet, etc.

What’s more is that the facelifted Venue could be followed by Hyundai’s N-line Venue, a part of the performance-oriented line-up developed by the automaker. Let’s look at some of the cool features of the new Venue below,

The new Venue is said to be equipped with the same power train options as that of the original model. It comes with petrol or diesel engine + manual or automatic gearbox options. An 83hp, 1.2-litre naturally aspirated petrol engine, or a 120hp, 1.0-litre turbo-petrol engine or the 100hp, 1.5-litre diesel engine could be found below the hood. As for transmission, the same 6-speed manual or a 7-speed dual-clutch auto will continue in the facelift. The 7-speed automatic transmission option was first introduced by Hyundai in the first Venue and it will continue with the new one. Venue being a 5 seater is amply powered by the existing engines and we don’t think that the company will tinker with it.

We could expect a completely new front and rear fascia. A refreshed grille inspired by the next-gen Tucson can refresh the front look of the car. It will be combined with split headlamps along with a re-profiled front bumper. The size and profile of the SUV will remain unchanged so as to maintain its compactness. The alloy wheels are set to be designed new too. Since Venue Facelift is happening, we can also expect the Kia Sonet to follow the suit.

As for the rear, a completely redesigned back with L-shaped tail lamps. The lamps feature new LED inserts and a re-profiled bumper with a faux skid plate. This will give a much more rugged look to the compact SUV.

The interior of the vehicle has not been seen yet, but we can expect Hyundai to add some up-to-date features that come with its rivals. We can expect a larger touchscreen infotainment system, at least 9 inches, a brand-new upholstery, and so on. We will have more details as soon as the launch date is confirmed.

As we said earlier, Hyundai will also launch the N-line Venue this year. This will follow the i20 N-line. The Venue N-line has been seen tested overseas and it featured a much sportier look. It came with unique front and rear bumpers, red accents, twin exhaust tips and new alloy wheel design. The N-line Venue will most likely come with a 1.0-litre turbo-petrol engine coupled with a 7-speed DCT and 6-speed iMT transmission. The N-line variants of Hyundai are aimed for performance, & style. We can sure hope them to find their own fan base in India and abroad.

Volkswagen GT line has pushed even other car makers like Toyota to launch their sport & power version in the country. With competitions launching their performance oriented models in India, the Korean Hyundai is also doing the same.

The current Venue is priced at ₹ 6.99 lakh-11.71 lakh. So, we can expect a step-up in the facelift’s price. The ex-showroom price of the facelifted edition could cost around 7.25 Lakhs to 12.5 Lakhs. The on road price of Hyundai Venue 2022 would be from 8.5 Lakhs to 14.5 Lakhs in India. The new Venue will face competition from Mahindra XUV300, Tata Nexon, Renault Kiger, Nissan Magnite, Toyota Urban Cruiser, & Maruti Suzuki Vitara Brezza. The Urban Cruiser and Vitara Brezza are expected to get a major update in the coming months and we can expect them both to provide a tough competition to the new Venue.

Regardless of the competition, the Korean companies, both Hyundai & Kia are still leading the overall sales number in the compact SUV segment in India. It will take some more time for the competitors like Tata & even Maruti to unseat the leaders now. With the launch of the facelifted Venue, the position will be cemented by the company.