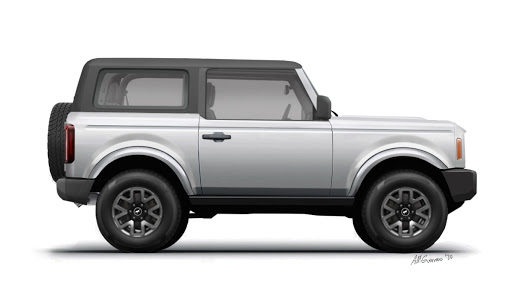 The American carmaker ‘Ford’ is gearing up to roll out 2021 Ford Bronco. The SUV is all set to be revealed in April 2021. The images of the car were recently uploaded, which has been spread all over the internet. The SUV has become the talk of the town ever since the news of its reveal came out. Ford is one of the most dominant manufacturers of the car in India, which has been winning the hearts of numerous people. The images of the SUV were spied while it was all wrapped and out for the testing.

Talking about the appearance of the 2021 Ford Bronco, it will feature the traditional designs at the front. Under the hood, if we look closely, the headlights of the SUV are quite similar to its older model. The headlamps of the car come with a distinctive design that features circular lamps along with a horizontal strip. The logo of the big bronco will be centered in the grille, which makes it look more appealing. It will get treatment of the black mesh with a thin strip in the open area. The design of the lower bumpers is quite simple. Coming to the dark bumpers, it proffers sufficient space for the driving lamps at the corner.

The dimensions of the 2021 Ford Bronco are highly impressive; it is slightly bigger than the other SUV in its category. The alloy wheels of the car offer entire black-themed looks, which also seems pretty appealing. You will also be able to witness the day-time running lights at the back of the car too. It is going to feature an angular silhouette, chiseled lines and front upright. Spotted models indicate a small-sized wipers; we can expect the production model of the car to offer bigger wipers in both sides.